If you're living abroad and rely on The Blob for all that's current in Ireland, it will come as huge surprise to hear that we now officially have a drought in drizzly ould Ireland. It is 22 days since any rain fell. Our yard is 40 shades of beige: umber, burnt umber, ochre, amber, chrome yellow, gamboge, fish-batter orange, cardboard brown, siena, burnt siena and the dead grass is crunchy underfoot. As from 05 July 2018, you are no longer permitted, on pain of a €125 fine, to use the public water supply to keep your window boxes alive; and that hose-pipe ban is in place until at least the end of the month. Even it is rains a monsoon in a week's time, the lack of rain all through June coupled with normal usage has depleted the reservoirs of the July and August supply. It didn't help that parents across the country brought out and filled the leaky paddling pool bought on special last year at ALDIDL.

Met Eireann is not 'giving' rain for another 10 days which is the outermost limit of their forecasting power. It's a good time to reflect on how much clean, chlorinated, coliform-free, cryptosporidium-negative water we piss away in normal life: running the kitchen tap for a minute to get a glass of cold water; brushing teeth to the sound of running water, flushing every tinkle; let alone washing the freakin' car, sprinkling the lawn and filling a kids' paddling pool with treated water.

tl:dr Generators not worth it.
When we had a bad winter and a lot of long-term power outage a few years ago there was a spike in the sales of petrol-fired generators to provide, extremely expensive and inefficient, local power. We didn't go that route: we really have enough Stuff about the place. But a few years later when the power was again out for several days after a storm we were grateful that our farrrrming neighbour lent us his generator for a couple of hours to a) run the deep-freeze back down to -20 b) run the water pump to replenish our supply of 5lt drinking water flasks. We were washing in buckets with water heated on the wood-stove and flushing with the residue. With power-cuts it is usual that they happen from storm damage and storms in Ireland are always associated with water. The one time in 20 years when a generator was handy (not essential, but convenient) is not enough argument to buy one-for-everyone-in-the-audience. They cost a lot of money, they are not maintenance-free, they are noisy; they have a huge carbon foot-print and, from our evidence, are rarely required. 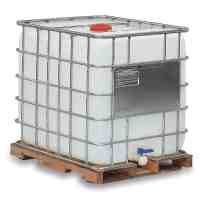 Water otoh is a different kettle of fish. I think that the present drought could focus our minds on our habitual waste of water.  Our water comes from a borehole in the yard with a submersible pump 30m below grade. We only pay for the electricity to pump it up, but we're still pretty careful with the water that comes out of the taps. For the garden, and especially our massive 17m x 9m polytunnel, we catch rainwater and re-deliver it inside the tunnel with a simple-enough system of pipes and buckets. Key to this infrastructure is a pair of 1 tonne intermediate bulk containers IBCs [example R], which take delivery from two gutters running the length of two sides of the tunnel just under the plastic. Actually it's a bit more complicated because, despite our best efforts with the JCB-backhoe, the floor of the tunnel is on a 1:10 slope; so the downhill gutter is almost as low as the uphill dirt.

Accordingly, I had to dig a pit to get the top of the uphill IBC below gutter level: 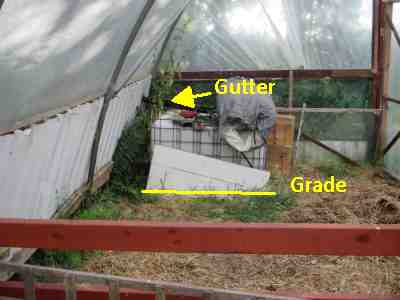 For the downhill gutter, we catch the rainwater in a big dustbin and pump it uphill to the second IBC which is 2m (empty) to 3m (full) higher than the plants on the tunnel floor. 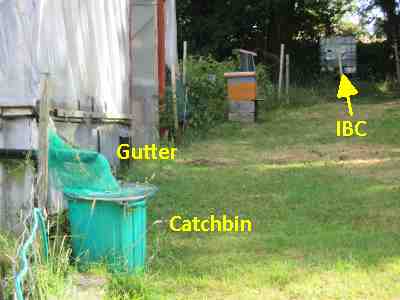 That gives us a 2,000 reservoir which can see us through many rainless days even if we're rich in super-thirsty tomatoes and beans. As I've said, this system requires some active management: me tricking about with pumps and buckets in the middle of a long-awaited downpour. But I think that has positive 'mindfulness' value: if you've had to work, and get wet, for the water then you're less likely to waste it.

Even if you have a polytunnel, it's unlikely to be, like ours, bigger than the footprint of your house. But if you have a home, and it has a roof and gutters, then you have many sq.m. of catchment for gathering pure rainwater for domestic and horticultural use. If you are paying for water, the cost will be somewhere in the region of $6US for each HCF [=hundred cubic feet =~ 3,000 lt = 3 tonnes]. That's only 0.2c/lt! no wonder we don't value it.

Is it worth spending, say, €100 on a second-hand IBC and maybe another €100 on infra-structure so that the down-chutes from the gutters deliver to the storage unit rather than into storm drains and away out to sea? Our modest home has a foot-print of 50sq.m. and a roof to match. In a typical year that roof will experience 1000mm of rain, which means that 50.cu.m. = 50 tonnes of water can be captured each year and used to flush the toilet, wash the car, water the window boxes. Actually, if we kept the system well cleaned out and we're not too squeamish about algae and mosquito larvae, that could be used for bathing and even cooking. 50 tonnes of metered water would cost us $6 * 50/3 = $100. So the payback time for a fully efficient IBC catch-and-recycle system is only a couple of years. To be clever, you'd want to install the IBC higher than the cistern of your toilet, but the engineering issues of keeping 1 tonne of water safely and permanently suspended 4m above the ground, is more than a a bodger-and-fixer like me could install. It costs remarkably little to pump water: a fistful of dollars a month for thousands of litres a day, so it's probably cheaper, and safer, to keep the IBC at ground level and pump water to the header tank.

A couple of videos to show what can be done a) by an old bodger from rainy Portland OR b) a bloke from the Arizona desert who is a lot more dependent on caught rainwater: so he has a 40 tonne storage capacity.
Posted by BobTheScientist at 07:31