On my birthday a couple of weeks ago, I dragged everyone in the house down to Trá na mBó, The Déise, before cake. That beach is a little exclusive, because you have to leave your car in the village and walk either a) up over the hill along a farm-track and down a rather steep path or b) along the rocks at the foot of the cliffs and round the headland. Neither is remotely possible in a wheelchair. If you meet anyone on the beach, which is rare enough, they are likely to be a little bit interesting. It's where I swapped quotes about The Way with Senator Grace O'Sullivan in 2016. In that piece, I called it The Secret Beach but that is a bit of a conflation because the next beach West is secret really exclusive: you can only get to it a) by entering a cave and scrambling up a 1:1 slope to a hole through which you can slip into the light on the far side or b) by kayak. Far from wheelchairs, that beach is only accessible to people with good knees and climber's fingers. The roof of the cave where the hole penetrates the rock has slumped a little since I was last there making the hole a bit bigger but also more crumbly. I think I'll give The Secret Beach a miss until the geology settles down. Anyway we all, from 24 to 64, went through the portal to see what we could see. Me, I could see a tangle of colour at the far end of the beach and was delighted that it was a) on the surface rather than half buried, b) light enough to carry away and c) interesting enough to be worth the effort. He[R]e's me with my birthday gift from Poseidon: I look miserable but inside I'm dancin'!  There is virtue in picking this stuff up off the beach while it is briefly there, because it's much more expensive and awkward to leave it for Boyan Slat to fish from an Oceanic Gyre.

And it's better to have it in landfill because it's all plastic and that's one way of locking up carbon for a long long time.  Quite apart from no longer choking turtles and strangling albatrosses. But re-use beats re-cycle and last week I spent a couple of hours in my yard at home under the broiling sun [wearing my hat instead of sun-cream] reducing the raffle to its component parts: 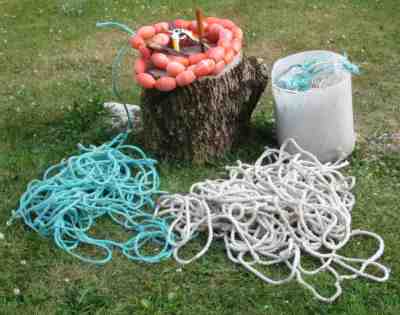 It's a puzzle, it's an optimisation. The buoys are strung on a blue cord and a monofilament net is attached to a white rope. The two ropes are then tagged together every fathom or so with a characteristic whip of white twine. The trick is to snip the whips and salvage as much line, in the longest possible length, and as many buoys as possible. The monofilament could be used for supporting beans but is really too much trouble to process. The tally:
Even 1 metre of rope is useful for tying shut a gate or repairing the handle of our aged wood-basket. When we were down on the beach, I mentioned that I intended to use the orange floats and some blue ones salvaged earlier to write messages in code to hang in our 2016 woodshed. Another afternoon in the broiling sun and it was so: 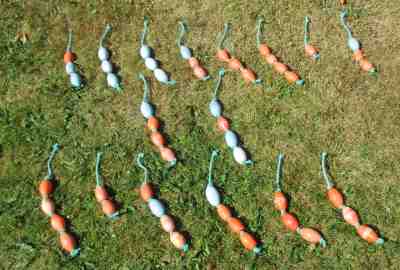 Which the following morning finished up in place: