"In the future, everyone will be world-famous for 15 minutes". There is some dispute about who said it first, but the quote was captured in print in a catalogue to a 1968 Andy Warhol exhibition at the Moderna Museet in Stockholm. It is a wry assessment of the damn-fool entertainment business when so much of it is about ordinary people being projectiled briefly ad astra by the Astra Satellite: X-Factor; Xland's Got Talent; Eggheads; I'm a Minor Celebrity Apply Leeches; and just about any radio programme that takes incoming phone calls. Not to mention MTV's mid-80s show "Andy Warhol's 15 Minutes". And we'll throw in the Lotto here: where the business model is that for €2 = 15 minutes work at mimimum wage you have a chance of buying Porsche or a world-cruise or a three-bedroom semi in suburban Dublin. If we lived in a fair and equable society, where people's ordinary needs - for food, shelter, friendship, respect, are met then ordinary people wouldn't have to hanker after the extremely unlikely. [Irish Lotto big win odds = 1 in 10,737,573, Y{local}MMV - odds of being struck by lightning in the USA this year 1 in 700,000]. 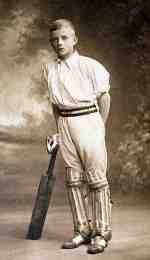 Anyway I don't want to talk about the endemic unhappiness of the modern world but reflect on a small boy who in 1899 scored a fabulous number of runs in an insignificant game of school cricket. Some sports are less exciting than others: basketball scores in excess of 100 are normal whereas a soccer match with 10 goals is very rare. Arthur Edward Jeune "James" Collins aka AEJ Collins opened the batting on 22nd June 1899 in a house match at Clifton College in Bristol. At the end of the following day, when his team finished their innings, Collins had built up a score of 628 runs. You don't have to understand the peculiar language of cricket [slip, gully, cover-point, long leg and silly-mid-on are all legitimate playing positions] to know that this was the highest score ever recorded and that the record stood until 2016.

What do you do if, at the age of 14, you've been written up twice in the sports pages of The Times as the most extraordinary cricketer of the age? They even printed a run of commemorative postcards [example R]. If the most common response upon being introduced to an [English] stranger was "Collins, eh, you wouldn't be related to that Collins who scored all those runs at Clifton in the year '99?". You'd never quite be able to live up to the expectations after that.  Well, as an orphan born out in India, as soon as he left school he went on to the Royal Military Academy, Woolwich [not to be confused with Royal Military College, Sandhurst] and then joined the Royal Engineers in 1904, married a fine young woman 10 years later and shipped out to France when WWI broke out that Summer. He was killed in a trench on 11th November 1914. His widow lived on and on alone for more than 50 years before dying in 1966 in Haslemere. I could easily have passed her on the street because my family lived in the same small market town 1965-1966.  What a pity, what a waste!

'Strange friend,' I said, 'here is no cause to mourn.'
'None,' said the other, 'save the undone years,
The hopelessness. Whatever hope is yours
Was my life also; I went hunting wild
After the wildest beauty in the world,
Which lies not calm in eyes, or braided hair,
But mocks the steady running of the hour,
And if it grieves, grieves richlier than here.
For by my glee might many men have laughed,
And of my weeping something had been left,
Which must die now. I mean the truth untold,
The pity of war, the pity war distilled.
Wilfred Owen Strange Meeting