I wrote a tuthree days ago about how water wasted washed out our lane.  A few cm of rain falling over a large area can amount to hundreds of tons water which if not contained but travelling can be very destructive.  I was thinking about that destructive power a couple of weeks ago on the anniversary of the Val di Stava dam failure on 19th July 1985, when a pair of tailings dams collapsed one after the other to release 180,000 cu.m of sludge-rich water.  This travelled down the valley for more than 4km destroying 8 bridges, dozens of other buildings and killing 268 people.  These things get a bit exponential because the surging mass started another 50,000 cu.m of soil, bricks, trees and rocks moving down the valley as well.

But that's what we bio-scientists call catabolism - the breakdown of complex things into their component parts.  I thought I'd report on the up-beat up-build anabolic side of the water equation, today.  It's been the longest driest hottest July for a many a long year.  I'll post the Met Eireann monthly summary when they release it towards the end of the week.  But it worked for us because we got the hay cut, baled and sold off-site by the 8th of July - which was a change from last year when the rank and soggy grass was still standing, loaded with thistles (mainly Cirsium arvense), and dockens (Rumex obtusifolius) and sprinkled with the dreaded ragweed (Ambrosia spp.) until mid-September. 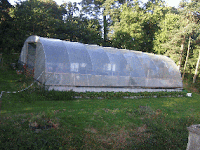 But the dry spell continued for another 16 days and our polytunnel was consuming water like it fell from the skies. <--- The tunnel is a structure of steel tubes bent into hoops and covered in plastic.  You see them in gardens hither-and-yon but rarely as big as ours, which has a 17m x 9m footprint. I designed it to catch rainwater in gutters and deliver the life-giving fluid inside where it's needed.  We have 2 x 1cu.m IBCs and a miscellany of 135lt herring drums, 25 lt chemical drums, and lots of old feed buckets to store surplus water but these had all been drained.  So, much against my will, I had to turn on the tap and pay to pump water out of the ground!  The bloke who cut the hay, listened to me moaning and said that he'd be happy to suck 3000 gallons (say 15 tons) of water out the river into his slurry spreader and deliver it.  But that seems to cut against the parsimony grain too.  So when the rain finally appeared again (and flooded a hospital in Letterkenny 300km NW of here) 5 days ago, I was not going to waste a drop.  Whenever a summer shower came in I'd be up through the downpour to trick about with hose-pipes and buckets.  So far, apart from what's been distributed to the beans and tomatoes, we're about 1500 lt ahead or about half full storage capacity. That's from a catchment area of about 150 sq,m, so maybe 1cm of rainfall - sounds about right if the annual average is 75cm.  (I wrote this a few days ago, and after some sharp showers on Wednesday, we are now brimful in all our storage solutions).

So I'm sleeping a little easier and  a little wetter as I'm not above going out in my pyjamas to check things.
Posted by BobTheScientist at 09:07