The Bend in the Boyne Brú na Bóinne is richer in neolithic structure than anywhere else in Europe. It knocks our wee Neolithic Ringstone into the ha'penny place. Newgrange is the cherry of the artifacts partly because it was 'restored' in 1967-1974 from an ould hape to a structure with a dazzling white wall of quartz which may have existed 5,000 years ago in the same place. The currants in the local landscake are the similar but less impressive, less tricked-about mounds at Dowth and Knowth and dozens of rings, lines, pits, holes, ditches, banks which can be picked up if you know where and how to look [source for more detail].  or Maybe Boyne Valley Landscapes Project Phase III Final Report 2010 by Davis, Megarry, Davis, Barton from The Heritage Council INSTAR Program. 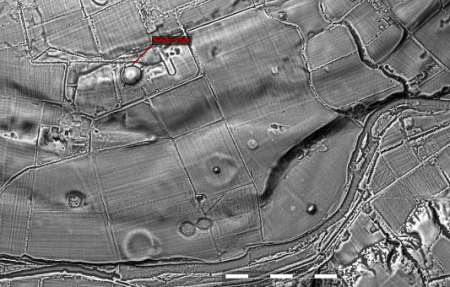 That picture is taken with LiDAR [bloboprev] which captures and exaggerates minute variations in the height of the ground: ignoring plant cover which might be taller than the maximum soil-height difference.

You can see every wart and suture in the landscape EVERYTHING . . .you might think. Because you'll agree that, for the whole field nearest to the extreme SW [bottom left] corner [clipped out L], it's a case of nothing to see here, folks. But you would be wrong because there are other ways of seeing the landscape, with different tools, at a different time, with a different mindset. Anthony Murphy is a local man, a sub-editor on the Farrrrmer's Journal, who has been fossicking about the North of Co Meath for nearly 20 years, looking at things sideways and talking to people and reading books . . . and writing them, and taking photographs and running a website all about the interface between human history, myth and the landscape called Mythical Ireland. A couple of years ago he got a drone and started to look at things from above. And then we had a punishing drought and he took out his drone because of the drought-marks being reported in the UK.  He snapped a picture of that same-old same-old field and found a 'new' circular structure where none was documented before:Gobsmacked, he was:“When I saw it first I was like ‘what’s that? What the hell is that?’ It’s something I had never seen before. It is huge.” 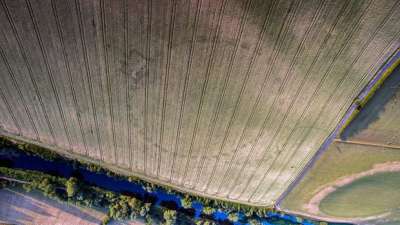 I've turned it upside down to make it clear how the new henge - sacred enclosure - fits into the busy landscape. The circles at the right edge of each picture are the same thing. It was suggested on the wireless, not entirely as a joke, that these henges might have been a 2,000 capacity sports ground rather than a place of religious ritual. Then again, sport and religion blend into each other is a rather uncomfortable way. The drought exaggerates any discrepancy in the water-retaining capacity of the soil. The surface of the field after thousands of years of rainfall and windstorm and, especially, ploughing is flat like a billiard table and so LiDAR-opaque. But the 200m wide circle of wooden pillars sunk into holes 4,500 years ago has changed the soil, its microbial community and its porosity forever. More coverage, better pics: RTE; BBC; RIA; Twitter; Indo;
Get yer drones out, folks! (before it rains)
Posted by BobTheScientist at 07:30