The hazards of globalization! 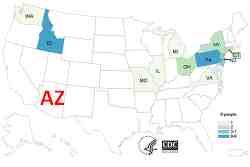 Since March in the USA, there has been a multistate outbreak of E.coli O157:H7 driven food-poisoning. A few dozen people in 11 states have been infected and several of them have gotten very sick indeed. All the cases are hundreds of kilometers from the currently identified source Chopped Romaine Lettuce from Arizona. Every year in the US there are a couple of similar outbreaks from a remarkable variety of sources:
That's just the E.coli, folks, the CDC has a page for Campylobacter and a more exciting one for Salmonella. The irony will not be lost on you how many of these attacks come from healthy-lifestyle foods.  If you want alfalfa sprouts, then buy 1kg of seeds $1.49 and save yourself a mort o' money spouting your own.

It must be edgy fun to be a CDC epidemiologist, flying around the country interviewing people: “I need a food diary for the seven days before you got sick – tell me everything you ate”
Everything?
Everything!
Dr CDC then enters the data into a neat relational database to look for commonalities. Inevitably someone among the sick will forget that they ate dill pickles – perhaps because they were really eating a Big Mac and the ‘veg’ in that product is effectively invisible. But if 19/21 of all the sick folk ate romaine lettuce, then the hunt is on. Where did you buy the lettuce? Where did they buy the lettuce? And where did they buy the lettuce? In the current case CDC have tracked it to lettuce growing in Yuma County in Arizona.

If they ever get to the bottom of it, it will probably be the bottom of an itinerant veg-picker, possibly illegal, probably being paid very little and worked very hard. There may not be a convenient convenience in the field; there may not be facilities for washing hands. If you’re desperate for work, you may turn up to work already leaky sick. A crate of coliform contaminated lettuce gathered by that one field hand may go to the wash-and-shred facility and mixed [economies of scale] with dozens of other crates and stirred around to loose the dirt. It’s like the pint of hepatitis C virus HCV contaminated blood that infected 1500 Irish women in the anti-D scandal. Make that two pints because the blood transfusion board cocked up again a decade later.

If we all grew our own food or spouted our own sprouts we wouldn’t have such a wide-spread dissipation of contaminants. The periodic cases of an entire village going blind after drinking methanol contaminated home-made cherry brandy are unfortunate but limited to a single wedding party. And the CDC have to take into account, and probably ignore, ‘false negatives’ – people who ate the same romaine lettuce but didn’t get sick. If our bore-hole is unwittingly connected underground with our septic drain-field, we may drink the water for years and not suffer any ill-effects. When Uncle Bill comes to visit from Philadelphia, he gets sick because, although his genes are our genes, his E.coli isn’t our E.coli.

Shiga toxin is why you die from O157. It triggers a cascade of reactions from the immune system and shatters lots of the red blood cells. Some of these fragments lodge in the capillaries of the glomeruli of the kidney. That anomaly triggers further attack from the immune system and in the worse cases the kidney shuts down. Then you are diagnosed with Hemolytic-uremic syndrome (HUS). MegaPharma is working on the basic biology of the immune response: what triggers what; and the consequences of that . . . they are looking for target proteins that can be nobbled to calm down or shut off the response to the toxin. You might think that it would be a good idea, as well as dealing with the symptoms, to deal with the causative bug. But a [small] case control study has shown that antibiotics cause more cases of HUS than not antibiotics. Antibiotics may be killing good bacteria which are an essential factor in reining in the multiplication of the pathogen.

The CDC has to act quickly to alert the public that "Yuma, we have a problem" before more people sicken and die. But they also have to (equally quickly) discover the source, identify it publicly and move in to remediate the problem. With Circumspection and Focus! You can't say "it's salad" without the risk of putting completely innocent concerns out of business and enormous wastage and loss all the way up the food chain. As the author of an article in Gizmodo has it "The agency has recommended that everyone across the US throw out their store-bought chopped romaine (or any lettuce, if you’re vegetable-illiterate like me and can’t tell what kind it is), and avoid purchasing or eating chopped romaine from Yuma, Arizona."
Posted by BobTheScientist at 07:30