I was writing at the end of last year about what to pack if you have a few days notice of Armageddon and you can get to the supermarket before they run out of bread. I was digging, not very successfully, in the dustier recesses of my 'mind' for a list published after the Siege of Sebrenica that was short and a little counter intuitive. Turns out I didn't have the right siege and could only remember half of the items, so don't rely on me in an emergency. I was digging in the dustier recesses of my desk at home at the end of last week throwing out stuff that had been in a drawer for at least ten years. It can hardly claim to be pass the William Morris utility test: " . . . a golden rule that will fit everybody, this is it: Have nothing in your houses that you do not know to be useful, or believe to be beautiful" if it's been unused and unseen in the dusty dark for a decade. In a reasonably ruthless cull of the papers, I found a hard-copy of The List from which I was able to locate the source: published by Dee Xtrovert on MeFi in 2007, based on her experience of 3 years of Siege in Sarajevo in the Balkan Wars of the 1990s. It is scarcely credible that people had to suffer through that genocidal nonsense in Europe in the late 20thC. The veneer of civilisation is, it seems, but wafer thin. A bit of background on Bosnia and the Wars.

Because none of my readers ever follow links, I'll clip the Executive Summary as a direct quote here:
1) cooking oil
2) toilet paper, paper towels
3) spices, herbs, pepper and salt
4) sugar, chocolate (especially for its fat), candy, honey
5) soap, shampoo, cleaning products
6) seeds for easy-to-grow stuff
7) vitamins
8) if you can keep a couple of hens, you won't regret it. Nothing's as tradeable (relative to effort) as eggs! 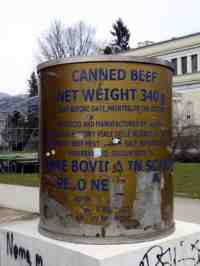 Dee makes the point that it is pointless to invest significant effort or resources in water. Even when the infrastructure has been bombed to buggery, people can find enough water to survive. Not enough to wash the car or sprinkle the lawn or even have a bath but enough to drink and boil rice. Water is heavy and you get through a helluva lot even without flushing the toilet, so it is effectively not sensible to stockpile it. Cooking oil otoh, that's currency. Dish soap likewise. 25 litres of oil will last a long time and make the difference between existing and living. So my immediate advice is to make some fritters now, because fried food is a real treat and slather on the butter if you're going to make a chip-butty: you'll regret it if after ye shytte hits ye fanne AYSHYF and you're subsisting on unsalted pasta . . . or ICAR canned beef.

In a city besieged for the worse part of three years, you might ask where the pasta came from. About 160,000 tonnes of food and medicine was supplied through Operation Provide Promise; a UN mandated delivery of humanitarian aid to the Bosniaks in Sarajevo. The quality of the incommming was 'mixed': some good; some beyond its sell-by date; some of it pork; some of it pork beyond its sell-by date. What's with the pork? It was available in the US but not the cleverest item to deliver to besieged muslims. After the war, the Bosniaks erected an ironic monument of thanks consisting of a giant can of ICAR canned beef [see R defaced] the most notorious humanitarian 'food' product that came in through UN secured Butmir Airport.

The Airlift was not without cost: an Italian air-freight flight was downed 03 Sep 92 by a SAM missile killing all four crew. There were more than 200 other hostile incidents. MSF estimated that 17,000 tonnes of useless medical supplies were shipped in, creating an opportunity cost of $250,million. The cost is based on the fact that handling miscellaneous, poorly-packed, out-of-date, inappropriate medicine displaces the processing of useful material. I won't go on, it is just too depressing. I'll channel a final bit of advice from Dee about living the moment rather than preparing for the unpreparable.
Posted by BobTheScientist at 07:30