If you know anything about rats Rattus norvegicus or indeed Rattus rattus you know that they have clocked a lot of ship-miles since Europeans started to range across the oceans of the world.  There are few places were humans have set foot where rats have not subsequently set up house. We'll leave aside the depredations of feral mice, cats, goats, pigs, sparrows for another time. It's not impossible to eliminate rats as invasive predatory species as I covered in my South Georgia story last month . . . you just need £10 million and ten years of intensive and well-planned effort.

You can weep or chew your beard at the thought of what omnivorous rats are capable of doing to the native bird species. They will eat anything small and tasty that can't fly away yet, so will be gobble chicks and eggs until whole species are driven to extinction - it's almost an evolutionary imperative. Small isolated islands tend to have smaller population sizes than for the same species on a nearby mainland. Predators have smaller populations than the predated. Small populations are more likely, just through random bad luck, to go extinct. These 'facts' have resulted in several predator-free, tree-huggin', all-lovin' Utopian islands which were sorely disrupted after discovery by Adventurers and their menagerie of dependent species: the boobies Sula leucogaster etc. didn't know what hit 'em. 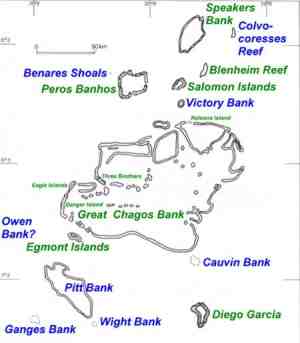 Nick Graham and his team wondered what are the wider ramifications of an invasion of rats and did a controlled experiment in the Chagos Archipelago in the Indian Ocean that was just published in Nature; with a News&Views executive summary by Nancy Knowlton. Why Chagos? because of the 16 or 60 islands [depending in what qualifies as an island and what is speck], some are ratty and some are ratless. You need your critical thinking hat on because the Great Chagos Bank is given as being 12,000+sq.km in extent but the small print confesses that only 5.6sq.km of it is above water! [bloboprev Diego Garcia]. In particular the ratologists asked if there was any difference in the off-shore ecosystem, which is, of course, completely off-limits to rats.

The differences between reefs offshore from ratty and ratfree can be put down to the nitrogen run-off which is 250x higher off ratfree islands. And the concentration of N is directly related to the density of sea-birds, which are 750x more common on ratfree islands. The deal seems to be that the birds fly off to the four horizons on a daily basis, hunt fish all day, eat some and bring the rest home for the chicks and/or incubating partner. Between foraging bouts and at night, the birds squawk a lot, squabble a bit with the neighbours, and shit copiously. The white stuff washes into the lagoon whenever it rains or whenever the waves wash over the beach. Nitrogen is essential for making DNA and proteins and in limited supply in most marine environments, so the local algae grow more vigorously off ratfree islands and the rest of the ecosystem. directly or indirectly  feeds off the green stuff. It seems especially important that ratless coral reefs do much better: have higher biomass, more species diversity and more biological turn-over if the rats are eliminated and the native sea-bird recover.

There are two Darwin stories to relate here. He was the first to articulate the presently accepted explanation for how coral atolls come to exist. He is also noted for his description of the unexpected interactions of many different species (clover, bees, mice, cats) to form the complex ecosystems through which we walk in wonder. Darwin's bulldog Thomas Henry Huxley later extended the web to infer that the success of the British Empire depended on the concentration of elderly unmarried women.
Posted by BobTheScientist at 07:54