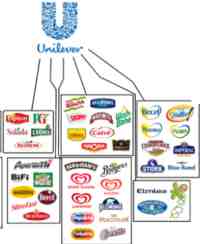 Infographic on the 10 MegaCorps [detail R] which own all the branded food-like material that populates the aisles of your local supermarket. The reddit thread is the source of doubt about how many of these brands qualify as Food. The Big Ten are Nestlé, General Mills, Danone, PepsiCo, Coca Cola, Mars, Kellogg's, Unilever, Associated British Foods, Mondeléz (recently Kraft). I've clipped out the continent owned by the chemical giant Unilever: if you imagine your Hellmann'sⓇ mayo or Ben & Jerry'sⓇ tastes like VaselineⓇ it's only a temporary glitch on a packaging line in Indonesia; it will be back to its normal taste of guar gum and anti-oxidants next week.

Thirty years ago, I used to quip that if you drilled down everything was owned by either General Foods or General Motors those obese soldiers of the capitalist dream. Back then it was a gross exaggeration, but 3 decades of mergers, acquisitions and hostile take-overs have reduced the number of players a lot. General Foods is gone: gobbled up by tobacco giant Philip Morris in 1985, which ate Kraft three years later. The conglom erased General Food to make a snappier letterhead in 1995. On the fertile common ground front, note that GF was started by CW Post in Battle Creek MI, after he'd had a session in the Kellogg health-farm just down the road. On the TMI front note that John Harvey Kellogg JHK was an advocate of both male MGM and female genital mutilation FGM in his War against Wanking WAW: reflect on that when you tuck into your Kellogg's Corn Flakes KCF. Does it disturb you that big tobacco should own the food chain?

Mondelēz is a damn-fool name (Mond = mundus = world + delēz sounds like delicious but looks vaguēly intērñatiönal) invented by a couple of Kraft employees and adopted by senior management experiencing a rush of blood to the head. The brand will Go Down well in Mother Russia because there it sounds like oral sex. Marketing experts are still shaking their heads but acknowledge that to the consumer it makes no difference because they never read the small print. Not like me.

It's in the nature of globalisation that you won't have heard of all the brands on the Mondelēz umbrella. Here's a sample:

But even the brandnames are irrelevant in the post-literate society. Consumers just need to recognise the logo. I can buy a Cornetto ice-cream all over Europe confident that with the Heartbrand logo [L] on the packaging it will have the same look-and-feel [guar gum, air, corn-starch and palm oil] as the familiar HB Cornetto back home. You will believe it's from the most familiar member of the ice-cream alphabet: Algida to Wall's.

Globalisation is rush to the bottom on price, with loads of unintended consequences. This essay by James Meek at the LRB From Somerdale to Skarbimierz tells the sorry tale of how accountant-led business practice working hand-in-glove with EU policy closed down the Cadbury's factory at Keynsham just outside Bristol in England and shifted the whole operation to a green-field site in the middle of Poland. Somerdale was also a greenfield site when it was acquired in 1923. The difference between The Fry family in 1923 and Mondelēz 100 years later is that the Frys were quakers and they built a raft of social facilities and sports grounds to keep their workers happy. Mondelēz got a huge subsidy from the EU and the local government put in all the roads and utilities. The irony was that the UK government, through the EU, paid good tax-payers money to deprive 5,000 UK voters of a job in the local chocolate factory. Willy Wonka indeed; you can see where the Brexiteers are coming from.

The Keynesham site has been renamed The Chocolate Quarter and acquired for housing mainly aimed at old people. The sport's facilities will be built over in due course. None of the bathrooms in the old factory flats have windows.  That's progress I suppose: you have to park us wrinklies and crumblies somewhere.

And Stop Press!: The EU has just ruled that Kvikk Lunsj [prev] owned by Cadbury owned by Mondelēz is not infringing on the trademark [shape division] of Kit-Kat owned by Rowntree owned by Nestlé. The case seems to have hinged on whether Kit-Kat was distinctively recognised in ALL EU countries. It failed to jump this rather high bar in Ireland, Portugal, Greece and Belgium where folks can't distinguish a Kit-Kat from Mars Bar at 30 paces.
Posted by BobTheScientist at 07:20