Apicomplexan  protozoa comprise many different species of parasites of animals, including Plasmodium (malaria), Toxoplasma gondii (not to be confused with Toxocara canis the roundworm kids pick up from dog shit in sandpits) and . . . Cryptosporidium.  They are weird and wonderful but humans can definitely have enough of them. In my Env.Chem. course they made a small parochial divertissement in the section on drinking water treatment because there had been a notorious outbreak of Cryptosporidiosis in Galway in 2007.  I used this as a vehicle for two ideas which are dear to my heart.

One concept is about On Being the Right Size, after the famous essay by JBS Haldane: the physical filters in one of the city's drinking water treatment plans at Terryland were insufficiently fine (> 0.9 μm) to exclude Crypto from the outgoing water. The protozoan is not properly killed by chlorination and Terryland didn't have UV treatment installed, so they failed on that count as well.  Another plant further up Lough Corrib at Luimnagh near Tuam was more modern and better kitted out, so part of the solution was to divert some of that supply from Tuam to the City of the Tribes further South. On my recent visit to The West and Lough Corrib, I got lost in suburban Galway and found myself at the very gates of the Terryland treatment plant. That was something to tell the kids back in The Institute.

I should come clean and confess that I may well have been wrong in my explanation (carcinogens out of the kitchen tap) of what went wrong in Poulaphouca and Ballymore Eustace to cause the water rationing in Dublin a month ago.  I now think that the settlement tanks in the treatment plant just got overwhelmed by the extra peaty particulate matter which had been washed out of the uplands by a wet October following a long dry summer. The floc needed extra time to settle so it wouldn't gum the works further downstream, but as Irish Water runs their treatment plants at 98% capacity at all times there is no slack available and they just had to switch off the tap periodically.

The other idea that I encouraged my students to address was the cost-benefitness of interventions in the real world.  Cases of Cryptosporidiosis happen every year in Ireland, some years worse than others, with a characteristic peak in the Spring:

Here the HSPC shows the number of cases for the whole country for 2004-2007. There were 609 cases in 2007, half of which were assigned to Galway, but there were a similar number in 2005 (570). Because the 2005 outbreaks were not clustered and didn't happen in the 4th biggest town in the country, they never made the news. After 2007, Dick Roche, the responsible Minister, announced that he would allocate €48million to upgrading the water-treatment plant at Terryland and maybe other plants in the area. I asked my students to reflect on whether this seemed a sensible way to spend a substantive chunk of the finite exchequer receipts.  Perhaps, I suggested, anyone suffering from Cryptospo-runs would rather have €80,000 for their troubles as a pro-rata share of the gum'ment loot. In Ireland we're rather well fed, Cryptosporidium is intermittent and most of us have built up some immune tolerance. In any case if we get really sick we're only minutes from a hospital which will gear up with suitable therapies to kill the microbe and rehydrate us.

This is perhaps annoyingly glib, especially if you're reading this doubled up with cramps on the john or if you're over 30 and hail from Milwaukee.  In 1993 that city experienced a huge municipal water driven Cryptosporidium outbreak, with 400,000 people affected - about half of those served by one of the two treatment plants.  The population served by the other plant (which didn't take in water from Lake Michigan 2km away from a sewage outfall) reported no cases.  More than 100 people died - although, as I said to my chemists, almost of all of these had compromised (HIV/AIDS, immunosuppressive drugs, elderly) immune systems.  But it is foolish to count the cost of such outbreaks only in coffins, as we do for road traffic accidents.  After 1993, the CDC published a report fronted by Phaedra Corso on the costs to the community of Milwaukee from this massive cock-up in policy and its implementation.   This is a data driven exercise in guesstimation.  The CDC classified the 400,000 into mildly (1 day off work: 88%), moderately (needed doctor and A&E, 4 days off work: 11%) and severe (needed hospital admission, 2 weeks off work: 1% = 4000 beds); and plugged the data into a tot-up program (physician visit $45, ambulance $225, hosptalisation $6,300, lost earnings for patient and carer $80/day etc.). 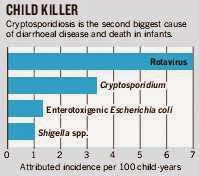 Part of the problem in water-treatment is that everyone from the WHO on down obsesses about fecal coliforms as if there are no other significant microbiological players.  Thus the EU parametric values are set so that 0 (zero!) colony-forming-units/100ml is the highest tolerable value for coliforms in drinking water.  Luckily what kills coliforms will kill most other diarrhea-inducing microbes. Which brings me to a timely essay in Nature last month by Boris Striepen which should serve to shift some of our cosy assumptions about what is actually killing small black babies every day.  A massive (N=22,500) study of third world infant diarrhea published in the Lancet in July 2013 obtained some data rather than woofling forward on obvious-to-all-thinking-people "knowledge". The data indicate that Cryptosporidiosis kills more than all the enterics combined and if we are to allocate resources on a strict utilitarian basis, we should sink as much research money into Crypto research as into HIV/AIDS - at least on the pediatric front. There are 20x more scientific papers published on malaria than on Crypto but malaria kills nothing like 20x more children.  You must read Professor Striepen's essay for some really nifty insights into how we might exploit the peculiarities of the life-cycle and biochemistry of Cryptosporidium to knock it back down into the cellar.  Rotavirus kills more but, as a virus, will be less amenable to such solutions.

Posted by BobTheScientist at 06:38