The devil in the detail

What a difference a vowel makes. At The Institute, I teach inter pluribus alia Human Physiology to pharmacy technicians. Very few of them had such an expensive education as me, so I try to cut them some slack on the long words. But in science and in their profession, for some of the long words, they just need to suck it up.  I find the anti-inflammatory antibody Adalimumab notably tongue-twisting, so I tend to talk more about Infliximab which has similar effects but is easier to pronounce. Here are some terrible twins in the spelling-bee of pharmacy:

Promazine v Promethazine; Tamoxifen v Tenoxicam; Vinblastine v Vincristine
In at least 2 out of the 3 cases above, an error in the writing, reading, dispensing or cross-checking of the prescription will have really adverse effects. The marketing department of MegaPharm Inc seems to live a dream-world of creative word-coinage.  The possibility of error multiplies as the number of medications increases - as it does as people age in the First World.  If you're over 80, you're likely to have a handful, or several handfuls, of meds to take every day. With failing sight and slipping memory, not to mention changes in the packaging, mistakes will be made. 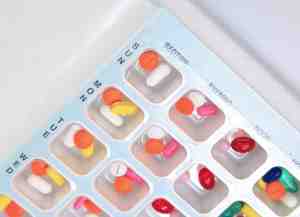 Blister-packs [L] were invented to make it easier to get the correct drugs down the patient-hatch on the correct schedule. The packs are assembled and filled in the pharmacy [instructional video]; they have large print labels and supply an audit trail for the owner and carers. The blister-pack option is offered by pharmacies if that seems appropriate. Last year, there was a court case and more forms to be filled after it transpired that some pharmacies were charging for 'phased dispensing' when it was really not appropriate. It's more convenient, and less error prone, for everyone if the weekly blister-packs are made up in batches of four for a month's use.

My aged father-in-law Pat the Salt is in his 90s and still fairly fit but clearly slowing down on multiple fronts. He's no longer, for example, able to mow 2/10ths of a hectare of lawn any more like he could at the age of 85. Growing old is all about the failure of all systems of homeostasis: the eye-muscles can no longer keep things in focus; the blood-pressure goes up and down - mostly up - erratically; core body temperature can no longer be maintained against external fluctuations; diabetes - failure to control effective insulin levels - gets more common; the immune system is slower off the mark so you have to give up unpasteurised dairy products (it's the Listeria, silly). And so on.

A couple of weeks ago, Pat complained of being dizzy so he was taken along to the GP. Nurse measured blood-pressure and found it rather low. Doctor confirmed and ordered him off his BP meds. All blood-pressure medicines are designed to lower blood pressure, because for almost all people high BP is the problem - driven by normal people sitting on the sofa; eating saturated animal fat; sprinkled like snow with table salt . . . and then filling in the corners with ice-cream and cake. The Beloved therefore took all the blister-packs back to the pharmacy and said "Pat's blood pressure is now too low could you fillet out the Reminyl from these two packs and reseal them, please?". And it was so.

Two weeks later, Pat was back to the GP to see how the new regime was working and the Nurse gets a 'normal' BP measurement. But 10 minutes later the GP finds it is too low. The discrepancy is a worry, no? In an ideal world, health practitioners would get out the sphygmomanometer three times to check for consistency but that is never going to happen in this busy world. A bit of detective work indicated that The Beloved should have said "Pat's blood pressure is now too low could you fillet out the Ramipril from these two packs and reseal them, please". More to the point, the pharmacy technician and the locum pharmacist should have acted on the whole sentence rather than getting triggered by the key-word. Reminyl is designed to give folks a boost to their memory; Ramipril a boost to the BP. Because of the comms failure he was on the wrong medicine for 2 whole weeks.

Lucky that Pat doesn't live with  Crohn's disease, psoriasis, ankylosing spondylitis or rheumatoid arthritis, all of which are annoying other members of his family. The treatment of choice for those auto-immune diseases is Infliximab marketed under the trade-name Remicade. Lucky for me-the-tax-payer too: costs per year: Ramipril=€160 ; Reminyl=€1,600; Remicade=€16,000.
Posted by BobTheScientist at 07:40