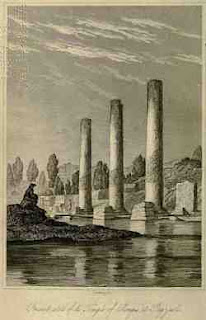 A few years ago, someone gave me a copy of Richard Fortey's [prev] book “Earth: An Intimate History”. I really enjoyed it, so much so that I can't lay my hand on a copy now - must have 'lent' it to a friend! The book is a learned but not academic investigation of this our restless Earth. Fortey knows his onions, especially the trilobites of the Ordovician period, about which no person on Earth knows more, but ranges far and wide in place and time to tell the ongoing story. The book is peppered with waggish humour which lightens the tone and makes it easier to read. The first chapter is about "The Temple of Serapis" in Pozzuoli, now a suburb of Naples. The print of the Temple [L] served as the frontispiece of volume I of Charles Lyell's 1830 Principles of Geology. That book was one of the very limited library that Charles Darwin crammed into his tiny cabin for his mind-boiling circumnavigation in HMS Beagle. Darwin, then aged 22, was a bit of  a Lyell groupie even before he left England and Lyell's concept of Uniformitarianism became a guiding principle of Darwin's world-view. The idea is that, given sufficient time, processes with which we are familiar today could have caused all the geological changes which shape the landscape and oceans today. Wind and rain; sun-bake and forest-fire; the tides and the flow of rivers; frost-heave and the grind of glaciers; with an occasional earthquake and landslide can give us the Andes and the Grand Canyon; the fjords of Norway and the Kalahari Desert. I developed this idea last year, again supported by the Lyell print.

The Temple of Serapis was key bit of evidence for this hypothesis. You can see the columns of the ruined temple at the water's edge today on dry land as it must have been when it was constructed nearly 2,000 years ago: it's not a Temple of Neptune / Poseidon after all. But close inspection shows that the base of each column is perforated with little holes aka gastrochaenolites which are definitively characteristic of burrowing marine molluscs of the genus Lithophaga [rock-eater]. Unless you believe in Loki the trickster god, the only rational explanation is that the whole temple gently lowered itself into the Mediterranean like Darwin's maiden aunt; wet its whistle for a couple of centuries; and then rose stately but dripping out the sea again. If a section of the Campanian coast could yo-yo up and down 10m between 100 and 1700CE, then the formation of the Andes was conceivable without calling for help from Jupiter, Poseidon or any other supernatural tinkering. You just need a million years instead of a couple of thousand.

The rest of Fortey's book carries forward the history with other stories and evidence, some of the equally improbably by seemingly true. The world is a pretty strange and wonderful place if we look at it, as did Darwin, through the uniformitarian eyes of Charles Lyell.

A couple of years after I finished the book, Fortey came to Dublin (possibly on a book-signing tour paid for by his publisher) and gave a talk at the ?Royal Irish Academy?.  Like for Heaney's Antigone, I more or less ordered everyone in the lab to come along and hear him talk.  I have to say that it was a big disappointment and my street-cred slumped a couple of notches because the talk was so dull. On the page he was so chirpy and alive, informative and witty, magisterial and self-deprecating; in real-time he was wooden and, dare I say it, boring. Maybe he had a massive headache. Heck, maybe I was hung-over. But such different dimensions or multiple intelligences are common enough in the one person. Me, I'm not stupid but I can be slow on the uptake: some things I can only work out if given sufficient time. Yes yes geological time is often required for me to get the message. And as a scientist I was always crap at writing the results up and getting them published; while I never had trouble writing book-reviews or home-ed newsletter articles or 700 words of Blob. Maybe I have a 700 word attention span and get daunted and exhausted at the prospect of writing a 7,000 word scientific paper. And I'm definitely more comfortable communicating here in Blobland than I am face-to-face: there's nobody to answer back, for starters.
Posted by BobTheScientist at 07:39