I was decluttering in the obscurer parts of my library - to wit a shelf in one of the sheds - when I put my hand on a copy of Gulliver's Travels, slightly foxed, scuffed and with a small patch of white mold on the front cover. It was a 1939 reprint of the 1899 edition published by Temple Press and illustrated by Arthur Rackham. Identical to this; except that my copy indicates that it was bought by my father on 8th Dec 1940. I find that rather sweet, a small self-indulgence in a 23 year old naval officer who had survived the exhaustion and terror of the Dunkirk evacuation but was still going on patrol in hostile seaways almost every night. It was only a few weeks before a sleep-sodden error of judgement put his motor torpedo boat out of action and thereby saved himself and his crew from a fatal encounter with Scharnhorst and Gneisenau during Unternehmen Zerberus the following February.

Every English-speaking child is aware of Gulliver's encounter with people who were inches to his feet in size, but my father was possibly of the last generation to read the actual book rather that get a bowdlerized summary in cartoon form. Here's a great illustrative rip-off 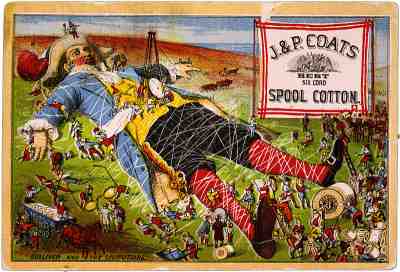 The shortening and sanitation in the conversion to picture book makes children miss the delightful story of how Gulliver averted a disastrous fire in the Emperor's palace by turning his own fire-hose upon the conflagration:
These buckets were about the size of large thimbles, and the poor people supplied me with them as fast as they could: but the flame was so violent that they did little good.  . . . The case seemed wholly desperate and deplorable; and this magnificent palace would have infallibly been burnt down to the ground, if, by a presence of mind unusual to me, I had not suddenly thought of an expedient.  I had, the evening before, drunk plentifully of a most delicious wine . . . which is very diuretic.  By the luckiest chance in the world, I had not discharged myself of any part of it.  The heat I had contracted by coming very near the flames, and by labouring to quench them, made the wine begin to operate by urine; which I voided in such a quantity, and applied so well to the proper places, that in three minutes the fire was wholly extinguished, and the rest of that noble pile, which had cost so many ages in erecting, preserved from destruction.
It turns out that his actions are not met with universal approval because "for, by the fundamental laws of the realm, it is capital in any person, of what quality soever, to make water within the precincts of the palace".  The Queen in particulat took against her massive guest after the event. How sensible is that as a fire-fighting solution? I don't mean in the sense of the residual whiff but simply in terms of volume. If Gulliver is 12x taller than the Lilliputans [yes! - see below] then his bladder is going to have 12^3 = 1728x the capacity of one of theirs. Our bladder has a capacity of 500ml, which we will double on account of the peculiar wine-soaked circumstances described above. I put it to you, ladies and gentlemen of the jury, that 1700 litres of water won't be anything near enough to extinguish a palace fire. The standards of the US National Fire Protection Association require a minimum capacity of 1,000 gallons for their water tenders: that's about 4,000lt or double Gulliver's bladderfull contribution.

Smart as he was, you wouldn't expect Dean Swift, a chap born in 1667 and educated in the Arts Block of Trinity College Dublin, to be up with the laws of allometry especially those concerning the proportions of the human body. Our students at The Institute are pretty weak at this and they're meant to be scientists. BUT then again, in another part of the book, the Lilliputan Emperor makes a contract with their unexpected guest to minimise accidental damage.
“1st, The man-mountain shall not depart from our dominions, without our license under our great seal.
“2d, He shall not presume to come into our metropolis, without our express order; at which time, the inhabitants shall have two hours warning to keep within doors.
“3d, The said man-mountain shall confine his walks to our principal high roads, and not offer to walk, or lie down, in a meadow or field of corn.
“4th, As he walks the said roads, he shall take the utmost care not to trample upon the bodies of any of our loving subjects, their horses, or carriages, nor take any of our subjects into his hands without their own consent.
“5th, If an express requires extraordinary despatch, the man-mountain shall be obliged to carry, in his pocket, the messenger and horse a six days journey, once in every moon, and return the said messenger back (if so required) safe to our imperial presence.
“6th, He shall be our ally against our enemies in the island of Blefuscu, and do his utmost to destroy their fleet, which is now preparing to invade us.
“7th, That the said man-mountain shall, at his times of leisure, be aiding and assisting to our workmen, in helping to raise certain great stones, towards covering the wall of the principal park, and other our royal buildings.
“8th, That the said man-mountain shall, in two moons’ time, deliver in an exact survey of the circumference of our dominions, by a computation of his own paces round the coast.
“Lastly, That, upon his solemn oath to observe all the above articles, the said man-mountain shall have a daily allowance of meat and drink sufficient for the support of 1724 of our subjects, with free access to our royal person, and other marks of our favour.  Given at our palace at Belfaborac, the twelfth day of the ninety-first moon of our reign.”

The overly precise number in the last article of the contract is explained thus "his majesty’s mathematicians, having taken the height of my body by the help of a quadrant, and finding it to exceed theirs in the proportion of twelve to one, they concluded from the similarity of their bodies, that mine must contain at least 1724 of theirs".  That 1724 is wrong, wrong nearly right as anyone with a calculator can verify. I therefore conclude that Dean Swift probably suffered from math anxiety but was able to cover the deficit by borrowing some figures from his mathematically competent friends. I suggest that St George Ashe, the Provost of TCD 1692-1695 is the most likely source of the fact that 12 x 12 x 12 = 1728 as he was a good enough friend to have officiated at Swift's wedding. But Swift couldn't even remember the number correctly!

Actually, Swift's calculations are fundamentally wrong. In 1883 German physiologist Max Rubner concluded that, at a steady state, the amount of calories taken in must balance the amount which can be dissipated as heat which is proportional to the surface area [12 x 12 x 12 in Gulliver's case] rather that the mass/volume. That theoretical construct was modified by Max Kleiber's 1932 experimental evidence that the basal metabolic rate BMR scales not at (body mass)2/3 but more likely as mass3/4.  In 2003 White and Seymour and put Kleiber back in his box by concluding that Rubner was right all along: BMR ∝ M2/3.  What's with the M2/3? M1/3 gets you from volume to linear measure and L2 coverts to surface area. We do thus because it is easy to measure a person's mass: being mostly water, you can get a good approximation of the volume in litres from the mass in kilograms. But the area of your skin is devilish difficult to actually measure and everyone who has tried to get a conversion between mass and surface area comes up with a different constant.
Posted by BobTheScientist at 07:34