Unless you live in a cave, you will have heard the news that a bunch of teenagers have been found alive and well after nine days stuck in a cave system in Thailand. They aren't out of their pickle yet because the risen water still closes off the obvious exit route - which is the same as the way in. The story set off a chain of memory for me because I have a little more experience than average in the gentle art of spelunking - wandering around underground in the dark with wet socks. That's because the average experience of caving is, to the nearest whole number, nil. For someone as deeply unsporty as I am (my idea of exercise is to heave myself off the sofa in search of more tea) I have a surprisingly wide experience of different sports: cricket, darts, field hockey, paragliding, rowing, rugger, sailing, skiing, soccer, squash, tennis, track-and-field, water-polo - done 'em all. Paragliding and caving I've only done the once. My pal Roy, who took me caving in the Yorkshire Dales, took to spelunking as a sort of natural extension of his hill walking and scrambling.

A couple of years after my novice-level sopping-wet-in-Winter introduction, Roy and his pal Les set off for another caving adventure. They did all the right things: checked the weather; packed food and water; dressed warmly; told their wives where they were going; left a clear note of intentions on the dash-board of their parked car. They went into a cave intending to spend only 20 minutes checking it out before moving on to another more extensive system further up the valley. When they turned round to depart, the water had risen in dramatic fashion and the ingress had disappeared under the torrent. Like the boys in Thailand, they retreated further into the cave and found somewhere dry to sit it out. In those pre-google days they had missed the nugget of cavers lore that all the locals knew about: that 3 days after a substantial spill of rain Sleet's Gill was likely to rise fast and dangerous and stay that way for several days. 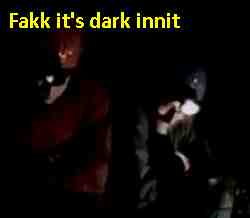 After 24 hours in the darkness, they were just beginning to hallucinate from sensory deprivation [R from the TV docudrama] when they heard a voice and then voices. Two lads from the Mountain Rescue Volunteers had scuba-dived into the rushing water to find them . . . and found them. They said hello, then disappeared again before returning with hot food and a flask full of hot sweet tea the colour of tomato soup.  Rescue was at hand because Roy's wife had realised that her bloke was late, late even if he'd stopped for a pint and a bag of chips after his day's fun . . . very late and she's called 999 after midnight to set events in train.

It was a dilemma because the forecast was giving yet more rain and their haven was likely, under those conditions to fill up in its turn. Roy and Les were given their first ever lesson in scuba-diving and brought out through the narrow winding pitch black tunnel that was their only escape route. Nobody died that weekend and Roy went back to work at Tyne Tees TV on the Monday.

He pitched his boss the idea of making a documentary about the adventure and it was broadcast starring Roy and Les as themselves in No Picnic at Sleets Gill. The film captures the sanguine attitude of the rescue party: not expecting to find two living 'tourists' and already thinking about how they'd get the bodies out. Caving is safe enough if you choose a pitch commensurate with your ability and experience AND the weather up-top is normal and predictable. It is bloody dangerous if conditions have changed so that someone requires rescue. Dangerous for the rescuees and dangerous for the volunteers who put their lives at risk. I seem to remember that Roy and Les went back to Yorkshire on the first anniversary of their ordeal and bought the lads a round of drinks. It was more than he himself got by way of thanks after he pulled a boy out of a collapsed sand-dune to join the Brotherhood of St Adjudor. He's dead now, is Roy, but he was alive while he lived: kind, resourceful, funny, sorely missed.
Posted by BobTheScientist at 07:42