eeee, I do like a lemon meringue pie [L from BBC], but I know it's too much trouble to make one myself. One problem is that the pastry takes longer to cook than the lemon curd or the meringue, so you have to start the process by baking the pastry case 'blind'. Late in my culinary career, I was taught to support the inside edges of the pastry case with tin-foil as well as covering the base of the pastry with a handful of beans to stop it up-puffing: that worked.

I've written before about the utility of having The Beloved's aged blind grandmother to live with us when Dau.I and Dau.II were small. The presence of a venerable old lady with clear-and-present needs emphasised that the girls were not the centre of the universe. They were attentive in delivering their elderly relative to the bathroom, or locating her slippers. If you treat people with a handicap, as if they are handicapped then they will learn to be helpless. It's better for everyone if you get some work out of the buggers. I never had the patience to knead the bread as much as it should be kneaded; but that's because I'm a work-shy snow-flake. The old lady was happy to get a good arm and upper-body work-out kneading bread until the gluten was fully-developed; she would stop until it felt right.

I was thinking about baking blind when Penny Melville-Brown PMB surfaced on the blogosphere for winning a James Holman Prize for Blind Ambition last year. It is sponsored by Lighthouse, a San Francisco based non-profit to level the playing field for the visually impaired. It is named for James Holman, a RN naval officer who, 200 years ago, contracted a weird tropical disease in his 20s that deprived him of sight. Nevertheless he spent the next several decades travelling alone to exotic places: "feeling his way round the world". It turns out that PMB was also a naval officer until a degenerative eye-disease secured her a medical discharge. That was tough on her career but freed up some time to pursue another passion - cooking. She believes that cooking had a unique role to play in bringing people together: sighted and sight-impaired, yes, but also people from different cultures and traditions. All this cooking produces food which, if you're open to change, can blow your mind or at the very least do a number on your taste-buds.

PMB started a youtube channel call Baking Blind that aimed to amuse, empower and educate about the process of food and cooking. Here's herself and John baking some goods for comic relief red nose day. They are wearing silly opaque glasses <comic relief after all> but John has two small holes drilled through the front to give him a feel of tunnel-vision.

Even with a 10o circle of vision, he's still waaay ahead of Penny: he can see if something is boiling, check the colour of the crust, recognise the difference between icing sugar and cocoa powder. But there is some helpful tech in the kitchen: a bar-code reader that speaks the contents of the jar of baking soda. Between the two of them, they turn out a passable, and doubtless delicious batch of bagels, some choc-chip cookies and a pecan pie. A couple of years ago, I wrote about BeMyEyes a global network for blind people who are apped up: point your smart-phone at anything and the first pickup at the end of the network will tell you what it looks like. I guess this works better if you speak English than if you want the service in Algonquin or Schweizerdeutsch.  As I said before, the Faroese have an app where volunteers will answer any questions about their language, culture, food, ecology, sheep, waterfalls or postal service. 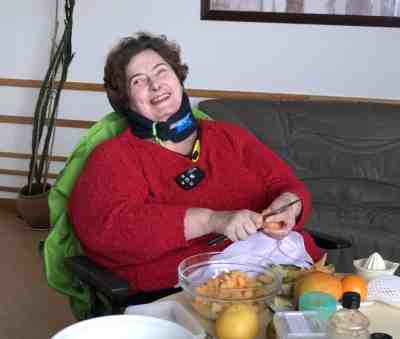 Winning the $25,000 Holman prize allowed PMB to take her pots and pans and message to Australia, China, Costa Rica, Malawi, and USA. She had almost finished her round the world tour last December when she had car accident in France.  But you can't keep a strong woman down with mere fractured vertebrae. Here she is slicing and dicing in her new neck-brace. Blind person breaks back may remind you of Mark Pollock's story - or Simone George's parallel tale. You should check out Penny Melville-Brown's Baking Blind channel: good fun, nice message.
Posted by BobTheScientist at 07:40