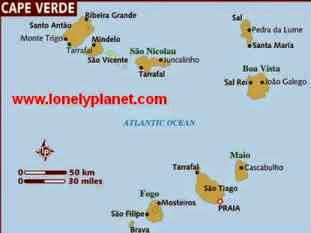 On our field-trip to Cabo Verde we did more than play cards and get drunk on cheap beer (and push back the frontiers of science); we observed a different culture at close quarters. We divided our time in the archipelago between Mindelo, an old British coaling station in the North and Praia de Santiago, the nation's capital in the South. The Northern isles are called Barlavento (windward) and the Southern group is Sotavento (leeward) from the prevailing wind direction. In the Caribbean it is vice versa with the Leeward islands in the North and these facts determined the direction in which the infamous triangular trade cycled.
In Praia, we had rooms in a little hotel in the centre of town about two blocks from the central market. The dining room was on the flat roof which doubled as the laundry. We knew what was for dinner depending on the sounds coming from the sack that passed our doors on the way from market to pot - usually goat or chicken. I got up early and watched the town coming to life each morning from our 2nd floor balcony. One part of the unfolding daily play was the children who went down hill each with an empty 25 lt drum and came back 10-15 minutes later carrying it full of water on their heads. Ten years later, my girls were born and they were forever being told what a cushy billet they had with water coming from a tap in the kitchen. But that luxury wasn't in the house when we bought it in 1996. The Beloved used to go to the spring with her sibs to collect water for the house in the mid 1960s and we thought that was a chore we could spare our own children, so we sunk a bore-hole and installed a bathroom, kitchen sink and a flush toilet.

I'm reminded of that because of a post from Russianside about his grandmother's dealings with water which were almost religious in the respect and value that was put on every cupful.  It's more than the fact that clean water was hard to come by, although that was part of it, certainly for the women and children whose task it was to fetch water. If you have to carry 10 lt of water for a few hundred meters uphill, you're not going to use it to flush the toilet. As the Duke of Edinburgh harrumphed it "Biggest waste of water in the world: pee half a pint and flush two gallons".

We're in Massachusetts for a couple of weeks and they've just paid the quarterly water bill.  The units are HCF, hundred cubic feet = 750 US gallons = 2840 lt or just under 3 tons of water. The citizens of this town pay more if they go mad on their water consumption, so there are three bands:
The implication is that up to 20 HCF [57 tons!] of water per quarter is 'normal'; and only when household consumption exceeds this do premium rates apply.  That's 600 lt a day.  You'd need a large family of Cabo Verdean children to supply that: one child would take so long s/he'd miss the whole school day.

My friend Chris del Bosque and his family have taken a compromise position. They have running water in the kitchen and a bath and a shower but they have refused to have a flush-toilet. Everyone shits in a bucket and someone, the man of the house usually as it happens, periodically empties the pail and its contaminated sawdust on the compost heap.  They're away on holiday and he was instructing the house-sitter about how everything worked and she asked why they don't have a flush toilet - wouldn't it be easier? The answer was "I don't feel really happy defecating in drinking water".  "But" she replied "it's not drinking water - that comes out of the tap: it's toilet water."  It takes folks a little time to fully appreciate how everyday taken-for-granted things work.

Actually millions of people in The West have decided that the drinking water that comes out of the tap is not really drinkable, so they buy bottled water for drinking and use the 'drinking water' for flushing the toilet, washing the car, washing the vegetables and boiling spuds. It's a market worth $100 billion a year and has the unintended consequence of filling landfills and the ocean with billions of single-use plastic bottles. After a long dry July, we've had a couple of storms which have nicely brought on the grass in the fields for the lambs.  I've also managed to harvest 2 tons of water from the outside of the poly-tunnel, so that we can water the tomatoes, green beans, courgettes and lettuce inside. I don't feel really happy about using the tap water to irrigate the vegetables.
Posted by BobTheScientist at 03:18