The Minister (of Education) was down to The Institute yesterday . . . to turn the sod on our new Sports Campus. As a deeply unsporty person, I look a bit askance at the importance given to sport  by Institutes of Learning. As opposed to other (quieter?) off-curriculum possibilities like archaeology, beekeeping, chess, dance, entomology, fishing, gardening, hairdressing, ironing, juggling, knitting, lego, movies . . , When I was in school, a chunk of my very expensive education was to participate in a wide variety of organised sports, but I mostly played it for laughs. As I saw it then, with so much that needed fixing in the World it seemed, well, unproductive to have 22 people and a referee running in random circles for 90 minutes. That's a person week of steam with nothing to show for it. Insofar as recreational physical activity had a necessary place in my life I preferred to go on a solitary run: at least nobody got to lose that match. Later on I recognised that doing things together - singing, drumming, sporting - is part of the healthy human condition and so had merit. I also got to appreciate that, without the structure of a sports fixture, many people, including self, would find it difficult to ever lever themselves off the sofa . . . and that leads to obesity, atherosclerosis and an early death.

Some sports require more infrastructure than others. Cross-country running requires less organised works than a soccer pitch; a squash court is more complex than a hand-ball alley. On The Institute's main Campus, sports facilities consume about a third of the footprint; and car-parking about a fifth. The main neutral green space, which used to have a lovely avenue of cherry trees, has been built over since I came to work here. The most recent building was opened by the same Minister in January of last year. There are ambitions for further expansion. The college has acquired a parcel of land about 1km out along the road out of town to provide additional pitches and running tracks and changing facilities. It might also be a cunning plan to convert more on-campus green-space into laboratories, innovation incubators, vice-presidential office suites, surveillance towers. Some suggest that all the car-parking should be shifted out to the sports-platz, so that everyone gets 2km of walking every day.

The arrival of diggers and dump-trucks to begin works on that site was what the Minister was required to symbolically start. But the minister is a busy man and speeches have to be made before the shovel is handed to The Great Man. It is 1000m between the new site and the nearest microphone. Accordingly the already symbolic bit of work by The Man in a Suit was shifted to a patch of grass just outside the lecture hall so we wouldn't have to shift all the witnesses and photographers to a different location. If you've ever been to a funeral you'll know how the run of events has a hiccup / pause while the departed is shifted from the chapel to the diggings. The problem is that, except for two spits of rain over the weekend, there has been a drought for nearly 4 weeks. That patch of convenient grass is a) beige b) brittle c) set in concrete.  No problem: as well as importing the Minister we'll also import the sod [there is an obvious comparison joke to be made there]. In the picture below, I've highlighted the 4sq.m. of turf  - the little white van which delivered it is just off camera to the right. 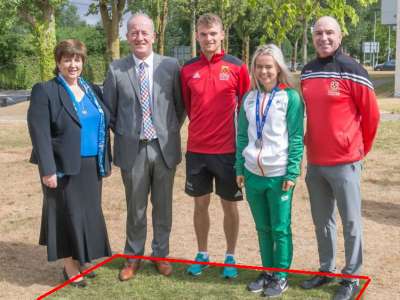 The youth in the photo are two of our sporty students Marcus Lawlor and Molly Scott, the latter with her silver medal which she won in a relay at the IAAF World U20 Championships in Finland last week. 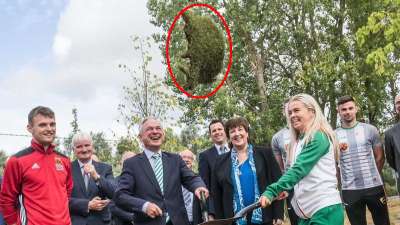 The absurdity of the symbolic sod-turning could only with difficulty be taken seriously, and I'm glad to report that the Minister and Molly played it for laughs by shifting from sod-turning to pancake-tossing. All good fun.

Less jollity down the road at the Minister-less new sports complex which is right next door to a brand-new secondary school called Tyndall College. That school is not going to open anytime soon because the multinational that acquired to the contract to build the complex was Carillion which went bust at the beginning of the year. Another company Sammon which was somehow involved in the stew of contractors, out-sourcers, fixers, consultants and entrepreneurs has also gone down the financial toilet. A whole rattle of sub-contractors: electricians, plumbers, plasterers, painters, steel-erectors have put in time and materiél and now, because of the serial bankruptcies, are out of pocket if not also out of business. While the Minister was tossing turves with Molly and Marcus, several of the subbies were down the road taking down the fencing that they installed just a few weeks ago. The Minister stoutly maintains that the dispute, about who owes what to whom, is nothing to do with the Department of Education. But it is: one or more of his functionaries failed to carry out due diligence on the companies that won the government contracts. That's why we pay the Government's Head of Procurement the big bucks: so that the buck stops on his desk . . . no I don't believe that equation will ever apply here either.
Posted by BobTheScientist at 07:38