I was boasting the other day about my "prowess" in sports: which amounts to the fact that, in the course of my very expensive education, I was given the chance to try a number of different ways of striking a ball. In 2002, The Boy told me to pack my traps for a weekend on the Isle of Wight with him and his pal Eoin. "Y'have to come paragliding with me and Eoin, Dad, it will be a bonding experience". As an institutionalised kind of bloke, I can obey orders, so I flew to London and we left early early on Saturday to catch the ferry to IoW and onwards to the Paragliding School at Mellow. Saturday morning was fun, we were kitted out with a "canopy" appropriate to our weight, then taken to a sloping field and taught the elements of take-off and landing. To get airborne, you first have to lay out the nylon canopy in such a way that with controlled tugs you can get it to fill with breeze and start to lift. You then turn round and run like Bernoulli buggery downhill hoping that the the canopy will become a aerofoil generating a pressure differential that gives sufficient lift to take flight. It takes a bit of practice but soon enough one minute you'll be pounding downhill and the next your legs will be rotating in the air 2 or 3 metres off the ground and you can glide to the bottom of the hill.

After lunch, everyone was taken to the bottom of the chalk downs by LandRover and the morning lesson was repeated from the top of the downs maybe 30m up a steepish slope. This is where you get the chance to catch a thermal which means that you don't have to trudge up from the bottom at the end of each flight. You can rather get the rising warm air, the on-shore sea-breeze, and the aerofoil of your canopy to deliver you back to your start point for another go. After a couple of mildly amusing glides downhill parallel to the grass, on my third attempt, most of me was suddenly hoiked vertically upwards about 25m leaving my stomach behind. I was airborne but terrified that I'd be swept out to sea: 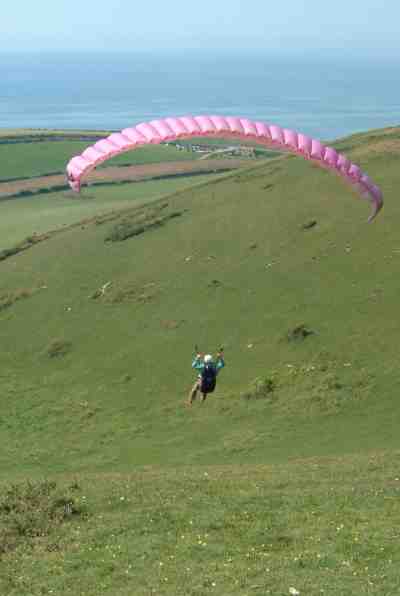 I have achieved what every budding paraglider aspires to; and I knew I wanted no part of the game. For the rest of the afternoon, I avoided my turn in the air: as a beginner's class only one person was allowed airborne at a time. But eventually, I stood up to the plate to give it another go - we'd paid a chunk of money for the privilege, after all. It all went wrong, a stiff breeze swept in from the sea dragging my canopy backwards, the instructor tried to pull me straight but suddenly one half of the canopy collapsed as the other side took off and my feet were whisked out from under me. The Boy caught it all on film until he dropped the camera diving forward trying to catch me. I finished up in a heap on the ground mumbling heroic things and looking for someone called Hardy to gie us a kiss: 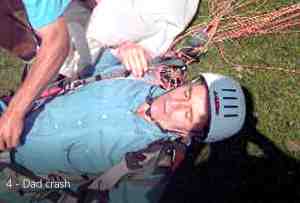 My fore-arm had a huge bruise the size and shape of half a hen's egg and I assumed I'd broken my arm when it was crushed between the chalky soil and my descending rib-cage. I hadn't. But I had an excellent excuse to spend the Sunday session in spectator mode watching The Boy and Eoin and the others cruising about in the air, landing in shrubberies, and having a flyin' time altogether.

When I got back to work in St Vincent's Hospital, I asked one of the junior doctors to check if, rather than my arm, I'd broken some ribs. "Here Conor, crepitate my ribs to see if they're bust; it will be practice for when you're in an A&E rotation." Crepitation was a diagnostic practice back in Nelson's day: if your ribs were broken the doctor could hear the jagged ends creaking against each other when he pressed the place with his thumbs. Young Conor was having none of that, but he did give me a chit for the X-ray department and duly told me that two of my ribs were fractured but I wasn't going to puncture a lung so I'd just have to wait until the damage repaired itself. "Try not to laugh" he suggested.
Posted by BobTheScientist at 07:20