I've now finished Wendy Mitchell and Anna Wharton's book about the walking demented Somebody I Used to Know. I wrote an interim report ten days ago.  There are 55,000 people living with dementia in Ireland; that's about 14/1000 of the adult population. If you don't know someone with dementia, then you're deliberately looking the other way. As a public service, and as an aide-memoire for me lest I forget, I here-and-now capture some ideas, mostly culled from Mitchell's book, but also from her youtube presence, which will make living with dementia easier for everyone.
♫You might, waggishly, choose to have Iris Dement singing along in the background♫ 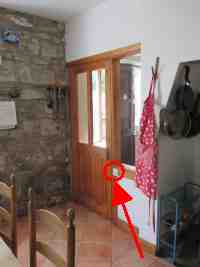 As I say above, the standard advice is to move to your final destination before you lose your marbles. A lot of these tricks would be unnecessary if longer familiarity had embedded the location of switches, cupboards and rooms. Here's a bit more cogent advice on interpersonal relationships between the demented and their carers.
It's not easy dealing with the demented but you can make it a whole lot harder on yourself if you play your cards wrong. otoh OTOH if you are totally hands-off with engagement and challenge as these diktats seem to recommend, then you may precipitate the persistent vacant state/stare that is the cliché of dementia. Keeping fit is an important predictor of better life quality; keeping fit is exhausting; someone needs to be the trainer here and probably take some flak. A cross Mammy is better than one with weeping bed-sores.

Wendy's Blog
Posted by BobTheScientist at 07:25