But you're wrong Humpo! because almost all use of words requires someone else to hear/read them. That other person will layer meaning onto your utterances; even if you are addressing your future self with a shopping list or your old self berating it for those fateful choices in the Yellow Wood. Jaysus and don't I know it: when I go back to read some of the pieces I've written in The Blob, I just scratch my head because it doesn't seem to mean anything, not even to me who wrote it. What was I on [about]? I think this is where  the phrase utter nonsense applies.

Communication is all in the pragmatics and semantics . . . and [honours grade]  implicatures, cancellability, entailments, and presuppositions. Semantics is the study of what words mean and how they are clagged together [in phrases and sentences] to convey that meaning. Pragmatics throws context into the mix, so that additional layers of meaning are transmitted or received;  perhaps in error, because the outgoing seems to change as it becomes incoming.
My aunt has a cedar chest
So what, my uncle has a wooden leg
I've an uncle with a wooden leg called Jack
What's the other leg called?
Time flies like an arrow but fruit flies like a banana.
Ambiguity and imprecision and poor communication can start an argument or start a war; just like a misplaced comma can cost million$. It can be particularly dangerous if the communicants use translators who further muddy the waters. It seems that in complex organisations like the UN, second order translation might be required. In the Venn diagram of translators, the intersect between Estonian and Thai might be null so the dialogue must go Estonian to French to Thai, and back again bleeding nuance along the way. And let's hear it for Koreans learning English cussing.

Accordingly it is probably worth investing some time and money researching how discourse transmits meaning, to help us avoid misunderstandings before they get all shouty (or deal with them effectively later). 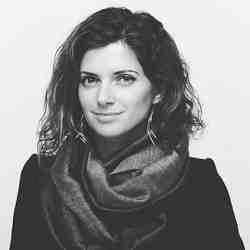 These ideas have been floating my my cousin Trevor's boat for a good while but surfaced recently when Lera Boroditsky, a cognitive psychologist from California, popped up in the blogosphere. Her position is that the language we speak determines how we think. Overview PDF in Sci.Am. This is not an original idea, nor does Boroditsky claim it to herself, indeed she flags its long-standing controversial nature at the beginning of her November 2017 TED talk.
Hmmm, I'm a bit skeptical about the Charlemagne 'quote'. Although widely disseminated on Pinterest, posters and Quote-lists, I can find no evidence of him saying any such thing in the contemporary Einhard's Vita Caroli Magni or the slightly later De Carolo Magno by the Monk of St Gall. What was Charlemagne's second language, anyway? Einhard says he was fluent and persuasive in Latin as well as his native Frankish. Charlemagne's descendant Emperor Carlos V [the Carloth Thinco who gave the Cathtillians their lithp] is supposed to have said "I speak Spanish to God, Italian to women, French to men and German to my horse." or maybe that was Frederick the Great? one of them continental johnnies anyway, they are great with languages.

Lingusitic relativism is usually associated with Edward Sapir and his student Benjamin Lee Whorf. They maintained, in separate research threads, that language can shift the way you think. A standard experiment is to get Germans and Spaniards to word-associate with the word for bridge. Germans start at die Brücke and think feminine thoughts: delicate, frumpy, beautiful; while Spaniards go from el puente all blokey to strong, lonnnnng, well 'ard, overbearing. Nobody has suggested that German engineers compromise the physical structure of their bridges to put more frills on them. Although, as we saw, <anecdote alert> in the Miami bridge collapse in March, this error happens in designing bridges in what was part of Spanish America.

I mentioned in my piece about the Greek flag Κυανόλευκη cyanoleuki how the Anglophone blue is split [in Greek, Turkish and Russian] into lighter blues γαλανός galanos; mavi; голубой goluboy and darker blues μπλε ble; lacivert; синий siniy. When you wire Russians up and show them a changing spectrum of blues there is a little flip of activity when the view passes through the categorical change. fwiw Boroditsky grew up in Belarus as Лера Бородицкая. The experimental Russians are also (millisecond latency) quicker [statistically significant] at flagging the голубой синий difference in button-pressing tests.

As another example of how a different world-view (driven by the language spoken) shakes our cosy assumptions, Boroditsky has worked with the Kuuk Thaayorre folk who live in Pormpuraaw in Northern Queensland. For them, the language of direction is absolute as ours is relative. In Ireland all directions are given from pub to pub but at each way point you're told to turn left or right. Approaching from the other direction and the instructions will be right or left. For the Kuuk Thaayorre you are told to turn NorthEast when you get to the edge of the forest; you scratch your Western arm until you turn round when it becomes your East arm. Amazingly, but naturally, these people know where they are in the world and would surely make navigators. Other languages have no specific counting words beyond 2 or 3; I guess they would make poor accountants.

Boroditsky makes two global points. 1) that almost all we know about how the brain works is from experiments carried out with the participation of US college students. This is a very tight demographic; even after all the post-WWII Affirmative Action carried out by Ivy League universities. 2) There are 7,000 languages out there on the planet but all US college students speak English . . . or Spanish. If a language does shape the universe of its speakers, then we're not hearing about the world-view and consequent neural connexions of 7,000 - 2 = pretty much everyone. We are <ooops> losing a language a week. Imagine if the last people who have an appropriate way of dealing with {climate change | inequality | water | sustainability} are all over 70 and living in a remote valley in New Guinea.

If you have a longer attention span than the celebs who get to TED, you might prefer this hour at the School for Advanced Research, Santa Fe NM. First 45 minutes talk, the rest questions, all good. "The single biggest problem with communication is the illusion that it has occurred" GB Shaw. Puzzle: 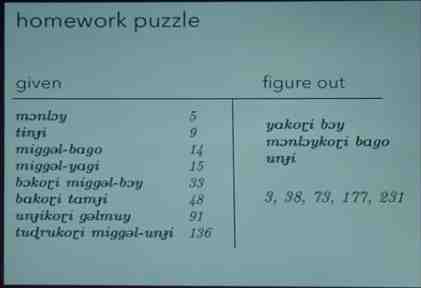 Like winning a Lasker often presages a Nobel in Physiology and medicine, so TED talkers often  get interviewed at The Edge. Boroditsky has had her Edge session where she claims " I haven't yet met someone who doesn't care about the question of whether language shapes thought". One of the handy aspects of Edge protocol is that they provide a transcript of each talk as well as a video record. In 2011, you may remember, US VP Dick Cheney was out hunting and accidentally shot his friend in the face. This may remind you of Bill Clinton's Jesuitical definition of sexual relations he didn't have with the intern Monica Lewinsky.  Boroditsky uses the shooter incident [no, not that one, the other one] to discuss how Cheney's agency in the event was, through thoughtful use of language transformed from perpetrator to mere witness. Harry Whittington, the victim, helped to circle the wagons round the Veep when he apologized for getting shot in the face.  The transcript ups the ante by reporting a headline claiming that, while out in the Texas back-country, "Cheney Bangs Lawyer", which adds a whole other Brokeback Mountain aspect to the issue. The transcriptor wrote what s/he heard on the tape, to me it sounds at 21m24s like "Cheney Bans Lawyer".

You've got to love someone who claims on their website "She once used the Indonesian exclusive "we" correctly before breakfast, and was proud of herself about it all day".

More Women in Science
Posted by BobTheScientist at 07:37