As easy as ABC

"ABC is a paradigm shift in the project planning and procurement approach where the need to minimize mobility impacts which occur due to onsite construction activities are elevated to a higher priority" [wifflesource] For all the information in that sentence it might as easily apply to a recipe for chitterlings and cabbage. Accelerated Bridge Construction ABC is a novel method for building bridge-spans near to their final destination and sliding them into place smartly to minimize traffic disruption. 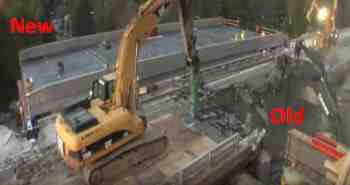 Picture is a still from a whizz-motion view of the process of demolishing one of the thousands of beyond-sell-by-date bridges [bloboprev] along the US Interstate highway system, and replacing it with a new pre-fabricated span . . . all over a single weekend. President Trump has promised $1 trillion towards upgrading President Eisenhower's Interstate infrastructure. It needs to happen quickly, before there is another - I35W - I85N - Interstate bridge failure; or a flap like the Oroville Dam spillway evacuation in Spring 2017. It seems that the first priority has been to invent a blizzard of confusing technobabble like the leader quote to this piece. Then we have to take on board a clatter of 'helpful' neologisms:
Well yesterday afternoon in one of the car-ruled suburbs of Miami, an ABC pedestrian bridge spanning a 7 lane highway on the edge of Florida International University's campus collapsed onto the roadway beneath just 5 days after being installed [8 minute time-lapse of that 6 hour process]. A handful of cars had the misfortune to be stopped at the lights immediately under the bridge when its 950 tonnes crushed cars and occupants. According to CGI put out by the responsible firm, the bridge was to be not merely a conduit between the FIU campus and the city of Sweetwater, but also a cool place to hang-out. Although putting up trusses with ABC is easy and efficient, it seems to be a bit harder to get the danged things to stay up. Watch the news for post-hoc analysis PHA; committees of investigation COI; and class-action suits CAS. There is irony in the fact that the bridge was designed to stop students like Alex Dale being killed trying to dodge the traffic between school and home. Reliable latest news from The BBC.
Posted by BobTheScientist at 07:29