Girl on the button 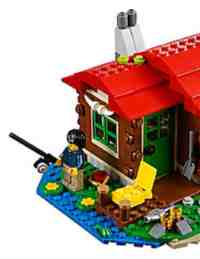 Though she be but little, she is fierce . . . competition for [contemplative] old blokes. Maxine McCormick is now 14 and started fly-fishing with her dad 5 years ago. She is now the World Champ in some categories of  this sport. She can reliably drop a hook weighing less than 1 gram in a bucket of water 30m away. Nobody can do that straight out of the box, you have to practice, practice, practice if you want to do it well. By coincidence, we were visiting Dau.II when I read the NYT piece about Ms McCormick, and my daughter has just added Lego Lakeside Lodge 31048 [L] to her collection of harmless fantasy. Yer man's fishing pole is a lot more robust than young Maxine would tolerate.
Fly-fishing is another of the sports into which I dipped during my very expensive education, but I was never any good at it: partly because I have the attention-span of a gnat. My dad taught us in the back-garden aiming at a washing-up basin "one, and two, one, and two . . ." to get the necessary rhythm going.  Indeed I'm quite confident that I never caught a fish using this deliberately difficult way of getting lunch. Fly-fishing was one of the things my father did to get out of the house - especially when the 1950s kitchen was full of terry-cloth diapers drying over the stove. I don't think he was much good at fishing and was more likely to exit the house carrying his bag of water-colours: 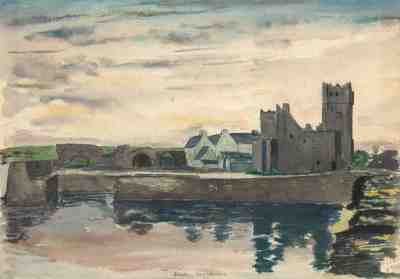 That's his 1969 take on Slade Castle and Quay in SW Wexford. Where I live now, the most likely angler I encounter is going to be a Polish plasterer having an afternoon off down by the River Barrow. But when I was growing up, fishermen, especially fly-fishermen, were likely to be like my dad: from the higher drawers of the middle class with a back-ground of living in a big house in the country. Background! we never lived in a big house in the country although my grandfather was born into one. Every year we'd go on holiday to Ireland and that would almost always involve staying a few days with my father's cousin who did live in a big house - with a lawn swooping down to the shores of Lough Derg [whc prev]. On at least one day while there, my father would load his three kids into one of the 6m rowing boats and take us out fishing. Not fly-fishing; more likely trolling from the back of the boat with a variety of artificial lures - spinners, spoons and other brightly jiggling things to carry a hook to a greedy fish's mouth. We caught fish in this way with some reliability and at the first bite my father would cry out "It's a trout, well done, it's a trout" [Salmo trutta and edible] but it never was. It was always pike [Esox lucius very sharp teeth, disagreeable disposition] or perch [Perca fluviatilis bright orange fins, full of bones]. Even back then, we sort of knew that my father's optimism outstripped his fish-knowledge.

Mais revenons nous a nos pêcheurs à la mouche: here's a bright micro-documentary about Maxine McCormick [4 mins]  from when she was only 11. Check out her internal clock going  "one, and two, one, and two . . ."  The interview seems to capture the disconcerting collision of ambition and competitiveness in the skin of a small symmetrical girl in tee-shirt and jeans. I think its wonderful to have someone that good and that small in any sort of competition. If, as a 64 y.o. bloke you have your hopes of a prize knocked into a cocked hat by a 14 y.o. girl then you'll have the chance to reflect that it's just a game. Or perhaps that the competition is not with others but with yourself:

every day and in every way I'm getting better and better.
Émile Coué de la Châtaigneraie
Posted by BobTheScientist at 06:59