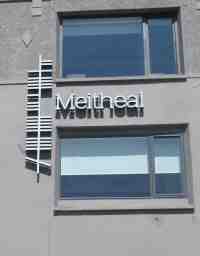 We were down in Cork last month a-visiting Dau.II. Just round from where she lives, on Father Matthew Quay is a design company called Meitheal, which, because they are Irish, together, right-on and design-conscious have written their name in Ogham on the office-facade. Ogham? [pronounced nowadays like ohm the unit of electrical resistance] is a stone- and treetrunk- carvers alphabet with which you can carve simple messages along the edge of a door-jamb or sarsen: Peadar Skinblister was here, that sort of thing. Because the letters consist entirely of slash-marks, you can write away with an axe or a stone-chisel or a knife . . . so long as you can count up to 5.  When I saw the sign, I knew it must be in code / ogham but it took a few seconds to twig that the inscription starts at the bottom and writes up.

There are a finite number - maybe 400 dated and authenticated - of these inscriptions which have survived; they are almost all written in ancient Irish and almost all on the island of Ireland mostly in the SW.  It is sometimes known as the Celtic Tree Language, because later scribes glossed each symbol with the name of a "tree", if you include shrubs like gorse, broom and fern. That gives letters and whole inscriptions some extra mystical power because each tree will have different medical, magical or practical properties.

Interestingly no surviving inscriptions (which are all on stone) include ᚆ H Úath whitethorn or  ᚎ Z Straif blackthorn or ᚍ N nGéadal broom which strongly suggests that there were earlier inscription on wood - and now lost - carved by people who spoke an older version of Irish which needed these sounds. Irish evolved to drop those phonemes, probably by merging them with other letters. This is like Latin, where the pedantic grammars say that second person singular pluperfect subjunctive of some verb is left blank because no example of that word has been found in the whole corpus of Latin writing. Classicists love this sort of thing: there is a whole other class of words called hapax legomenon ἅπαξ λεγόμενον - words of which only a single example is know in all literature. You can write you own boasts, challenges or <here's a great idea> tattoos in ogham using this neat ogham-translator which created the side-bar [R]

᚛ᚁᚑᚁ ᚏᚑᚈᚓ ᚈᚆᚔᚄ᚜
Posted by BobTheScientist at 07:40