Kathleen Eileen Moray Smith was born on 9th August 1878 - 140 years ago today - in Brownswood House just south of Enniscorthy, Co Wexford - our nearest bus-stop. Her family, like mine in King's County, were well-heeled horse-riding protesants. When Eileen was a teenager, her mother became the Baroness Gray by inheritance and the family adopted this style as their surname. She was, like m'daughters, largely home-educated; although we couldn't afford a series of governesses and Dau.I and Dau.II had to shift for themselves in the book learning. With the turn of the new century Gray went all bohemian to the Slade arts school in London and eventually moved to France where she was a leading light - and knew everyone - in modern design: she was mainly in the furniture and carpets department. 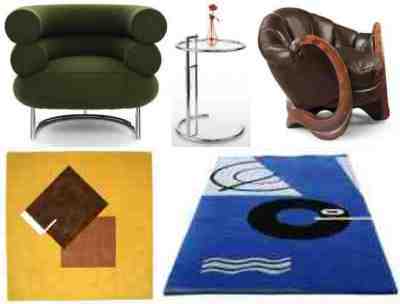 The table was designed to work in Gray's house E-1027 on the Côte d’Azur, in the South of France. At the time Gray was living with Jean Badovici and the house-name is a geeky internal coded joke: E for Eileen,  10 for Jean, 2 for Badovici and 7 for Gray. There's a famous story of the house being vandalised by The Patriarchy Le Corbusier “act of naked phallocracy” by a man asserting “his dominion, like a urinating dog, over the territory”. hmmmm, I'd better wash the rugs, so.  Her next house after she split with Badovici was called Tempe à Pailla which is also replete with hidden meaning: a local Provençal proverb holds that "time and hay are needed for the figs to split open". Oh fie, I know no where to look, I blush.

Far too much of quirky interest and rabbit-hole connexions to cover in a single tributary Blob - but here are 98 threads to follow on your own time.