It was Katherine Johnson's [R ecently] 100th birthday on Sunday 26 Aug 2018 = yesterday. When she was born Katherine Coleman, troops from her native West Virginia were fighting in France. They were part of the 92nd and 93rd Infantry Divisions that were fighting for democracy in colour-segregated military units. I guess they thought that, even as second class US citizens subject to all sorts of institutional abuse, they were still better off than black people in Gabon. Then again, maybe a job in the military was one of a limited range of employment opportunities available, and it was better than staying at home share-cropping.

Katharine must have been notably smart, especially at math, because her career on, up and out was supported at key times by her parents and people outside her immediate family. In her West Virginia county, for example, there was no public schooling for black kids after the age of 14. So her folks got her - aged 10! - enrolled in high school in Institute WV, 200km NW of home. Indeed, the whole family shipped off to Institute for the school year and came home for the Summer vacations. Having started early she finished high school aged 14 and enrolled in West Virginia College [segregated, of course] and graduated with joint quals in Math and French at the age when her wet white male contemporaries were only starting college at Harvard and MIT. Anyway her summa cum laude degree qualified her to teach in [segregated] high school. She married and had three children but you can't hold back an elemental force and in 1939 she was back in college hunting up a PhD. She dropped out after a year to raise family: I bet they had a chalk-board in the kitchen. 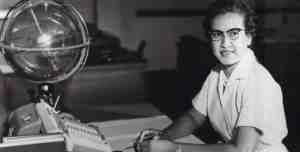 In 1952, she hung up her apron and took a job as a quant for National Advisory Committee for Aeronautics the predecessor of NASA. Actually she didn't hang up the apron, like any STEM woman, she had to do the bulk of the home-work before, after and in-between paid-work. That NACA job was in Hampton VA, 400km from home but the family shipped out there. Katherine had found her billet aged 34 and worked for NASA until she retired in 1986. There were bathroom problems, until The Patriarch decided that wee at NASA all pee the same colour. She had the mathematical chops, sure, but she also had feeling for 3-dimensional space similar to Barbara McClintock's feeling for the organism in her work with the genetics of maize. In the early days of NACA/NASA, 'computers' were people with desk-calculators [as above under the celestial globe]. But the problem of calculating the trajectory for delivering 70kg of muscle-and-bone to the moon and back is too complicated to compute by hand in the time required. But Katherine could use Euler's method for reconciling parabolic and elliptical trajectories. John F Kennedy's 25th May 1961 boast that the USA, through NASA, would put a man on the moon by the end of the 1960s definitely cranked up the pressure to embrace digital computers. Although their binary calculations had to be verified by Katherine Johnson and others before they were really believed. While she embraced computers, as she had long-division, analytical geometry and desk-calculators, she always tried to ensure that there was a back-up plan in the case of failure.

She has, inevitably clocked up some awards: in 2015 a Presidential Medal of Freedom from Barack Obama and honorary degrees from SUNY Farmingdale, Maryland's Capitol College, Virginia's Old Dominion University and West Virginia University. Obama must have known about Margot Lee Shetterly's 2016 book Hidden Figures: The American Dream and the Untold Story of the Black Women Who Helped Win the Space Race which was published the following year. It was made into a movie Hidden Figures - Trailer. Actually, if you have 20 minutes check out the featurette, She was scheduled to make it in Lego, but at the last minute she [was] pulled from Lego's Women in Science set, apparently because she didn't approve - fair enough. And hats off!

Many more Women in Science.