Only psychopaths kill without compunction. We have seen in the ethics of trolleyology that most 'normal' people are content to do utilitarian maths [killing one person to save five] if they can do this by pulling a lever to switch the run-away trolley to the other line. But far fewer are prepared to seize a fat chap by the lapels and heave him over the parapet to achieve the same trolley diverting solution. We should really make ourselves responsible for the consequences of our actions: it helps if we're forced to do distasteful things ourselves rather than pay someone else to do it for us. Make a total mess of a public toilet - hey, it happens to the loosest of us - but don't walk away from it expecting the poor [minimum wage poor] janitor to tidy it up. That's the difference between being an adult and an incontinent infant. Out of kindness, the adult/child rules should be bent for the sick, the demented, the dying. Being drunk doesn't count.

In 1981, Roger Fisher, a Harvard law professor had a neat idea for reducing the chance of starting WWIII. On inauguration day, an aide to the incoming President would have the nuclear codes surgically implanted next to his heart. If a Strangelove Armageddon situation developed, another aide would hand a butchers knife to The President and invite him to go get the codes. It would concentrate the President's mind on what an innocent death was about.

I was thinking along these channels because the red states in the USA are at the death penalty antics again. In particular, the state of Nebraska wishes to kill Carey Dean Moore, who was convicted of a double murder in Omaha in 1979. Jesus, Mary & Joseph that's forty years ago when Mr Moore was only a kid. Of the 15 perps who have been offed in the USA this year, the shortest time between conviction and execution is 10 years.  It costs $35,000 a year to keep a body encarcerated in Nebraska each year; more for the deluxe accommodation of death-row.

Moore is scheduled to die by a lethal injection protocol Tuesday 14th August 2018 [NYT]. But now Fresenius Kabi, a German pharmaceutical company, is in court for a stay of execution: citing reputational damage if its healthcare products are used for such a foul purpose as judicial execution. Their global reputation is the provision of i.v. solutions and dialysis products. It will be their contention that the vials of potassium chloride to be used as the final step in the Nebraska dance of death, were manufactured by Fresenius. They will also claim the manufacture of the muscle relaxant atracurium. Both drugs were distributed on the strict proviso that they could only be used in healthcare. Nebraska must, therefore, have obtained their supplies in a protocol with a muddied audit trail. That is not good for reputation of the state government. STOP PRESS: the stay of execution was denied by the US District Court on Saturday 11 Aug 18 [CNN] 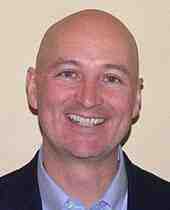 I've ranted before about the sciencification of the death penalty under the ludicrous hunt for a humane way to terminate a human life. As if banging up a human being in a cage for 40 years is somehow more conscionable? If you tried that on a horse, however bad-tempered, the local branch of the SPCA would be down to you pretty damn quick. That's Nebraska State Governor [L] he's a Republican, wants to keep the right to bear arms, is vehemently For the death penalty and is not above going down to the Tecumseh State Penitentiary to talk to state employees and also inmates. He seems like a man who talks the talk on correctional policy. Do you think he has it in him to cut through all this super expensive bureaucracy and legal quibbling about German reputational damage? Could he go down to death row with a butcher's knife and quickly and cleanly dispatch Mr Moore? Save the state $1,000,000!?
Posted by BobTheScientist at 07:27