Stephen Meyers is a working journalist in Colorado. Last year he was laid off from his suck a pencil and think deep thoughts gig and had to get a proper job. After weeks and weeks of exams, aptitude tests, security clearance, he was given a US Postal Service cap and a route and delivered mail for 15 months. He waggishly titled his piece Man of Letters to reflect on the ironic connexion between his two careers. Fifteen months is about the time it took for Dau.I to land her librarian job in the public service. The USPS and the Dublin Library Service are not cutting any corners in the application and approval process despite both being grossly deficient in the numbers necessary to run the service properly. 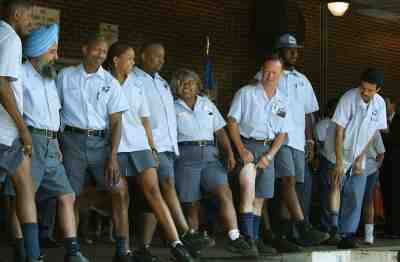 One of the reasons why its hard to recruit mail-carriers is because it's hard work . . . and the dog-bites. The picture above is a collection of uniformed USPS employees showing their battle-scars. It also shows the diversity of those who stitch the USA together. The Stephen Meyers piece is via MeFi where the comments fill out the picture a little. Including the rules on tipping and accepting gifts from citizens: Employee Tipping and Gift-Receiving Policy: All postal employees, including carriers, must comply with the Standards of Ethical Conduct for Employees of the Exec­utive Branch. Under these federal regulations, carriers are permitted to accept a gift worth $20 or less from a customer per occasion, such as Christmas. However, cash and cash equivalents, such as checks or gift cards that can be exchanged for cash, must never be accepted in any amount. Furthermore, no employee may accept more than $50 worth of gifts from any one customer in any one calendar year period.

I too was a man-of-letters briefly after I left school having secured a job as a hospital porter. Although I did once carry a dead body to the mortuary on that gig, my primary function was as the mail-man delivering, 3 times a day, X-rays, sputum samples, letters and parcels round the hospital. Between sorting and delivery rounds, I was told to hang out in the tea-room behind the porters front desk, rather than stand out front chatting to the bloke at the desk. The extra hand out front created an, entirely wrong, impression of idleness and over-manning. I therefore spent about 3 hours a day getting an anatomy lesson in the back room which was wall-papered with dozens of pictures of topless young-wans. I think the Head Porter told me that reading a book in there would also create the wrong impression if one of The Suits dropped in unexpectedly. The Head Porter was kind and effective but definitely not a man of letters, barely literate indeed as I found when he handed me an envelope and said "Take this round to Pysio". In all his years at the hospital nobody had discretely told him that Physio is a F-word.

BTB, the Brother of The Beloved, not to be confused with TBB The Boy's Beloved [prev], like me was subjected to a very expensive education. One of the few sources of happiness in the process, as opposed to building a better pub-quizzer, was the friendship he formed with two other lads in his final year before leaving school. These three BFF, having come together in the unlikely crucible of school, followed very different paths afterwards: an editor of The Irish Catholic; a graphic designer abroad and . . . a postman in Dublin. That last seems an unlikely an unlikely outcome from all that education, but I always approved. At [expensive] school, you are generally being hot-housed for college, preferably there to continue your rugby-football as well as academic studies. And after college, a profession, a spouse and 2.4 children. After 40 years in an office, a pension. BUT! Just because your parents or grandparents can afford the fees, doesn't mean that, in your heart-and-soul, you want to be driving a desk until you retire. The corporate ladder is stressful, betrayal is just the other side of the stationery closet and a sedentary life makes you fat. Postman sounds pretty good to me: you get outdoors; you meet people and you're clearly valued by your community; and it's permanent & pensionable.

I've written about the community gluing character and kindness of our Postman Pat when we move down-country to the farrrrm. And also about the popularity of my mother's postman in rural England. Every year the cost of sending a letter goes up and up because the number of letters sent goes down and down. It's hard to fight that spiral when you can send an e-mail 'for nothing'. Even though everyone enjoys getting something physical in the post, we rarely spend the €1 is costs to spread that pleasure to our friends-and-relations. It requires a couple of days of forward planning to send a real birthday card, let alone a letter, and few of us can muster that skill anymore.
Posted by BobTheScientist at 07:24