Where the Lard Things are

We had shoulder season in England taking a week hangin' with Gdau.I (6.5 yrs) and Gdau.II (2.5 yrs). Shoulder Season bridges the gap between what working people in the UK can claim as summer holidays and what teachers in the UK can claim. When both parents go back to work, who is going to mind the kids? The grandparents is who; or Auntie Dau.II. As the girls get older, the responsibilities change. The younger one has now mastered her bladder, so we are getting notice of the need to locate a toilet when we're off-site. It was a bit different when we had a similar gig last July: packing a nappy-bag adds to the burden if you're planning a picnic. She has also mastered the use of her legs, short as they are, and can poddle along at her own pace.

Gdau.I is currently mad-about-the-primates in the way that some other kids get absurdly knowledgeable about dinosaurs. The parents suggested that we might like to take the Gdaus off to The Noah's Ark Zoo out near Bristol Airport. It's one of 100 places where you can arrange an unforgettable birthday party for your little chap and his pals.  Prices starting at £17.50 /head, minimum £175. WTF? £175.00? The only thing that can be said in favour of such a venture is that it keeps the economy going/growing. It's only the start of course, because if Jimmy's parents can lay on Private animal handling session then Chuck's folks will have to up the ante - hang-gliding; paint-ball; pony-trekking; kayaking; abattoir. I gather that all the invited guests now rock up with a birthday present, as well. In my day, before the First War, we had birthdays too. There was cake; fizzy-pop, probably sandwiches; someone would eat the candles for a dare; after a couple of hours everyone went home having had an unforgettable birthday: especially if young Toby sicked up the candles before he left. Making your own simple fun is now sooooo yesterday.

It was no birthday of ours but nevertheless we thought about going to Noah's Ark (to see some monkeys, like) . . . until I found out that Noah was hoping to garnish my hard-earned accounts to the tune of £70 (£20 adults x 2;  £15 child x2)!! That's nearly €80: you can buy a car for €80 where we live. I was all for encouraging Gdau.I to develop an abiding interest about invertebrates and we could, like Agassiz, work our way across the tiny front lawn where she lives. Heck, I'd even put €40 into her Harvard Fund. Very democratic our family and my suggestion was not widely supported, so we went to The Wild Place instead. They also do unforgettable birthday parties, of course; and also Experiences like paying £40 for the privilege of shovelling up Okapi Okapia johnstoni shit for an afternoon. But the entry price was "only" £30 for the four of us. And it was right next door to Exit 17 off the M5: only about 25 minutes from home. 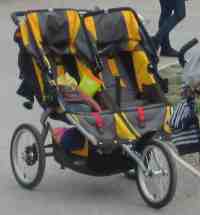 The Wild Place, is nice, quiet, unpretentious fun. The demographic seemed to be quite well-to-do yummy mummies with singleton children OR people of our age looking for every opportunity to sit down as their poor lonely grandchild had fun on his own. Fun didn't seem to involve interacting with any other children or meeting new people. Each micro-family group was drifting through the experience as if all the other people (of which there were many) were invisible. The paths were wide and allowed people to pass each other without interacting. Unless either party was pushing one of those enormous double-wide baby-buggies [example L]; in that case mere pedestrians like us had to cram ourselves in the bushes to avoid an accident. What is it with [not] walking?  We raised three kids and never owned a pram or a buggy. By the miracle of evolution, when human infants get too heavy to carry, they can stand and probably stagger a few steps. Or at least you can lean t'buggers up against a lamp-post to catch your breath. What's with the double-wides? it's not as if everyone has twins: and you often see a child occupying a seat and being pushed by his mammy when he's actually big enough to push his baby sister and be useful.  At the Wild Place last week the section with the lemurs is sufficiently constrained for space that the freakin' buggies had to be parked outside: 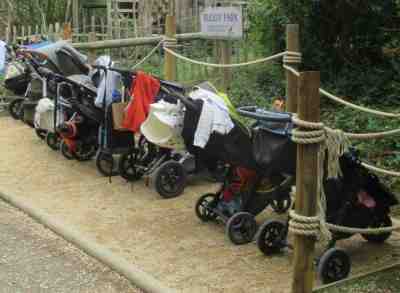 Above I show a small fraction of the vehicles that were getting in everyone's way at The Wild Place last week. Buggies are utter rubbish: alienating for the child; promoting obesity; awkward for public transport; potentially an expensive fashion accessory [you can spend £1000 on a buggy!].

The other disappointment was that we bought a shocking expensive lunch which cost as much as the entrance-fee. Lunch was also shocking slow in coming and my cappuccino was whisked away by a forcefully impatient yummy-mummy who couldn't see that a) the barista was learning her trade b) there was a queue. You may be sure that her buggy looked absurdly expensive . . . and only she could consider her children attractive.