We were down in Cork recently to hang out with Dau.II. Because of her interest in the purchase, preparation and presentation of provender you can guarantee that something both interesting and foodie will occur. This might be through the Baader-Meinhof Illusion: if food is in the air, you see it everywhere. Anyway, she ran out of corn-meal so we went upriver to the Quay Coop the go-to place for wholefoods, organic eggs and dodgy herbal remedies. 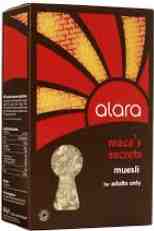 My attention was drawn to Alara Maca's Secrets Muesli especially because of the tag for adults only on the packet. We've met Maca before as an ingredient in Macaccino a brand of whoowah coffee. In the First World, where even the poorest have more money than sense, people turn up their noses at the normal food which their parents and grand-parents consumed and embrace the latest food-like product. The poor buy carbonated beverages, frozen pizza and chocolate biscuits. The comfortable know these are poison and go for herbal 'tea', 'organic' eggs and vegan ice-'cream' and other matter which is more expensive but of doubtful added value compared to ordinary tea, eggs and butter. What am dis Maca, so?  It is basically foreign cabbage from the root of  Lepidium meyenii a member of the Order Brassica / Crucifer from the high Andes. The other common name is Peruvian Ginseng, which will give you a clue as to its supposed potency. Dau.II's bloke surmised for adults only indicated either porn or booze, from which we need to protect children. Let's look at the Table of Contents.
Ingredients Oat Flakes (26%), Barley Flakes (22%), Dates Chopped (17%), Crispy Barley Flakes (14%), HOT! granola (oats, maca root powder [29%], apple juice, cocoa powder, ginger) (12%), Sunflower Seeds (6%), Pumpkin Seeds (3%) 100% organically grown ingredients 2200mg of maca in a 65g portion. Thus, as well as the [organic natch] oats and barley, you're getting 3% powdered Andean turnip.

The secret power of Maca is nothing to do with alcohol, or indeed porn, but is rather related to a supposed increase in libido, decrease in erectile dysfunction and a consequent increase in joyous [not only gay] bonking. And it claims wonders for the ladies too: both for the drag of premenstrual syndrome (PMS) and as a replacement for hormone replacement therapy (HRT) when the PMS finally shuts down at menopause. The most [not very] recent systematic review of the science indicates that there may be something in the claims, but that there are only a few, and those under-powered, properly controlled trials. But I guess that, with the current labelling, to whatever actual beneficial effects of Maca can be added a powerful puff of placebo. Buy the stuff, believe it will work and it probably will.

Who am dis Alara? The Alara backstory is a rags to riches tale of how Alex Smith started his business in a squat in central London by fishing discarded food from dumpsters and selling it to his crusty pals. It is now a multimillion dollar business employing a bunch of people, going easy on the planet and with ambitious plans for integrating into the local and global community.  They export to, at least: Cork, Spain, Belgium, Korea, Portugal, Japan, Slovakia, Slovenia, Sweden, Greece, Cyprus, Turkey, Malta, Finland.
Posted by BobTheScientist at 07:47