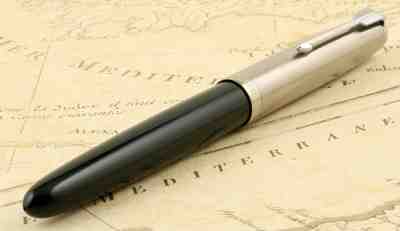 Came across a nostalgia piece on MeFi last week about peculiar reverence for a particular brand of ink pen - the Parker "51". They were priced at the cusp of 'status symbol expensive' and 'unaffordable for folks on a salary' - maybe 10 hours work for a middle manager. That artful marketing decision allowed the Park Pen Company to shift about 20 million 51s between the end of WWII and 1972. 20 million!! At a time when ball-point pens were being given away. When I was at school in the 1960s, I owned a fountain-pen - we all owned fountain pens; I suspect that they were in some sense compulsory because only a cad-and-a-bounder would use a ball-point pen. Actually, I owned a succession of fountain-pens because a) I was 11 and treated them casually b) they were the kind of thing that Uncle Jim would give a chap for his birthday or if he won a Latin composition prize. Parker pens had a distinctive arrow-shaped clip on the cap.  A fellow could casually store his Parker in the outer pocket of his jacket and everyone would know he was a Parker chap. Not all Parkers were as pricey as the "51" of course, the company were anxious to sell to poorer people also. But that's like the fact that we all need shoes: €18 a pair in Aldi or Penneys or €5000 a pair made by Lobb's of London. The other chaps in the office will note the difference and apply the appropriate label. Not me, I never check people's shoes - I'm too busy looking for small change.

The basic technology for a pen is the same as it was when Hugo Pictor was scribing his copy of St Jerome's commentary 1000 years ago. A stiffly flexible material (goose feather, sheet metal) is sharpened to a point and split down the middle, so that the ink can run down the slot by capillary action. Hugo would dip his pen in a bottle of ink to fill the hollow shaft of the feather and write till the pen ran dry - then dip, repeat. Fountain pens are higher tech but same principal: the 'fountain' is a reservoir of ink that can be filled - less often than dip dip dip in the 11thC scriptorium. All the marketing crap that we schoolboys, at some level, bought into (18 caret gold or ruthenium plated nibs; heck there was a brand of pen called Platinum) was just flim-flam and cake decoration. For me and my pal Gibbo the key attribute for a fountain pen was the mechanism by which t'bugger was filled. Best was if it was filled by using a little lever that evacuated the air from a rubber reservoir; because it was rubber the reservoir would suck ink in when the lever was released. Gibbo and I were not the first to realise that if you used the lever when the pen was full, then ink would blurf out of the nib and spill on the floor, a white shirt, or your Latin homework.

But I think we were original in drawing an elaborate map of the Kriegsmarine submarine pens at St Nazaire on a piece of paper and seeing how accurately we could ink-bomb them from a great height (about 3m if we took turns standing on a desk). As with painting and decorating, a large part of the process was in the preparation, and final success depended on hand-eye coordination. For the young-of-today <harrumph> the prep is 'borrowing' your father's credit card to order Grand Theft Auto [multi harrrumphy prev] from Amazon.


Posted by BobTheScientist at 07:06