A palomino did really well in the law and retired on his money just before he turned 50. That's several years ago now and after he left law he wasn't ready to hang up his boots entirely, so he partnered up with some others and formed a brokerage company. Their business model, insofar as I "bear-of-little-brain" could understand it, was to commodify carbon [footprint]. The UN [or some other supra-national quango] measured the carbon output of all nations on their books, and, as we all know now, found that it was way to high. Everyone was given a target for reducing their contribution to the whole monstrous problem. But some of these targets were easier to achieve than others. A poor third world country had a lot of people but few cars, no air-conditioners, no electric kettles, no huge dams to build for hydro-electric infrastructure, no high-rise corporate HQs to consume further concrete. On the fungibility of carbon everyone was agreed: The Republic of Boondockia's carbon credits could be traded for cash [or cars, Krugerrands, or corporate jets] with a first world country who couldn't meet its carbon targets ever or anytime soon. My friend's company would, for a modest percentage of the transaction, set up the deals between cash-rich and carbon-poor nations. That cunning plan was briefly, but not sustainably, successful until the whole policy on carbon-targets was thrown out of the window and something else was put in its place. You can get all huffy and judgmental on the ethics if you think it would help.

The Beloved threw a story at me that runs along similar tracks. Different scale, different chemical, different source, different problem, different outcome but . . . still about reducing the incommensurate to cash and thereby directly comparing apples and oranges. That's not so difficult actually, because they are both fruit. In the story above carbon is carbon is carbon, in this one nitrate is nitrate. And we really do not want the stuff in the water-supply.

In Ireland idiots the people have decided that water is free because it falls from the sky and so should appear >!KAdrip!< in our taps (cleared of coliform, cryptosporidium & cadmium) at no charge. In England they have decided that water is a commodity which you pay for, each region of the country is the bailiwick of a for-profit company contracted to supply drinking water and deal with the foul-water which citizens flush away: 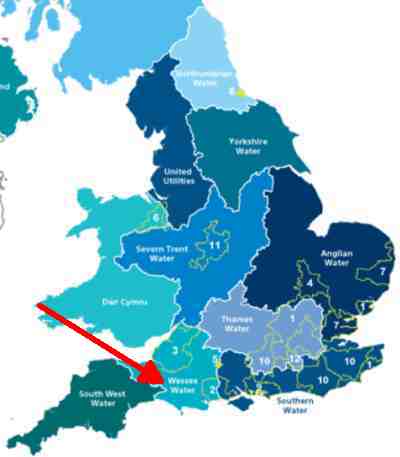 Today we are focused on Wessex Water: the bastion which protects my aged mother from the cholera.  They are a subsidiary of a Malaysian multinational conglomerate called YTL Corporation Berhad. Wessex Water discharges a part of their treated waste water into Poole Harbour, an important amenity area on the South Coast. The Boy Scout movement was founded there in 1907, for example. Its sheltered waters and surrounding wetlands are an acronym-rich Special Protection Area (SPA), Site of Special Scientific Interest (SSSI) and Bird Sensitive Areas (BSA): important habitat for birds, fish and invertebrates all in delicate balance, eating each other up and burping nutrients for the circus to continue. It is delicate because the harbour is 12 sq.km in extent but only 0.5m deep. The balance can take a certain amount of disturbance to the equilibrium: the long dry 2018 Summer; the long cold Winters of '47 and '63; a diesel spill from some nob's yacht; far too much tri-butyl-tin.  But there is doubt about whether tonnes of pollutants gathered from almost the entire county of Dorset can be absorbed without lasting ill-effect on the ecosystem.

The graph above shows that since I were a lad the amount of nitrogen (mostly nitrates) has more than doubled: the R Frome discharges into Poole Harbour. Nitrates are a problem because they can be converted into DNA and protein and increase biomass of species which normally find it hard to obtain the necessary nitrogen for growth. If we dump a load of extra nitrates into any aquatic environment, the tiny algae are first off the blocks in the race to use it. They grow like billy-o, metabolising as they go and consuming all the oxygen dissolved in the water. Without oxygen, the invertebrates and fish all go belly up; their dead bodies call jamboree for decomposing microbes which scarf up the last of the oxygen as they feast. The result is a transitory <pooo-eeee> charnel-house and then a poisoned watercourse where nothing lives. 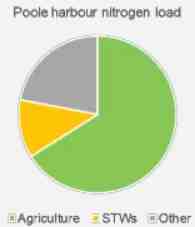 The regs indicated that Wessex Water had to reduce its discharge of nitrates into Poole Harbour by 40 tonnes a year. No fair, cried Wessex, there are 2,000 tonnes of nitrate added to the Harbour, so that 40 tonnes on our To Do List is only 2% of the total. Furthermore, it will cost our Malaysian masters £6 million to build new treatment plants which will incur a £400,000/yr running cost - that's £10,000 per tonne to process the waste water solution to the excess nitrate problem. They looked round the harbour for something on which to shift the blame. The graphic L shows that sewage treatment works STW's contribution is dwarfed by that of agriculture.  Agricultural nitrates enter the water because farmers pay for fertiliser and spread it on their fields in unsuitable quantities and inappropriate times. Before it can be absorbed by the wheat, beet or ryegrass, the rain comes in and washes the investment into the local drains, rills, streams and rivers, eventually to Poole Harbour.

Wessex contacted Entrade to do some research and broker a deal with local farmers. That solution sounds good because it looks at nitrates as a catchment issue rather than a Wessex Water issue. In our everything can be monetized world, nitrate is nitrate, in the same way as  €1 is $1.14. Entrade determined that, if farmers could be induced to plant cover crops over-winter when rainfall is highest, then that would demonstrably reduce fertilizer run-off. That would alsokeep the nutrient on the fields on which it had been spread and as a green manure provide better soil structure. And (although this wasn't factored in) promote microbial diversity in the soil. How to set the price? By auction! farmers bid for money from Wessex to encourage them to do manage their land a little differently. The price came down to £1.40 /kg N saved. I'm a bit out of my depth [so not in the shallows of Poole Harbour har har] here but I think that is equivalent to £6,360 /tonne NO3 saved. Which is less than the STW capital infrastructure solution at £10,000 /tonne.

Wessex can wriggle off the WFD hook and save a massive capital investment. My mother and her neighbours can continue to flush flush flush and pay for a bunch of Malaysians to deal with their ordures. If that sounds bit colonial it is; but the question is who is the coloniser and who the colonised?