Stan Brock is dead having spent 30+ years in the the Third World and the American heartlands helping sick and dispossessed people feel a bit better; better teeth, better spectacles, basic medical attention. His organisation Remote Area Medical isn't up for doing triple-bypass cardiac surgery or removing a testicular tumour, but can provide basic care and on-the-hoof interventions to win QALYs [quality adjusted life years] on behalf of those who have no medical insurance and so effectively get no care. It is a peculiarity of the USA world-view that it is not right to subsidise medical care for all citizens from tax dollars. It is okay to support car manufacturers, maize farmers, oil drillers, and nuclear power stations. But ensuring that all children get a basic medical care is somehow against the Will of God.

Brock was born in Northern England and left home and country at the age of 17 to seek his fortune in British Guyana [as cowboy to start with L]. He done good! eventually rising to manage a huge cattle ranch in the tropics which morphed into a successful TV and movie career. The idea and name for Remote Area Medical came to him when he was injured falling from a horse while many days walk from the nearest medical help. He reckoned that sort of accident, while tolerable if the ambulance is a phone-call away, is possibly fatal if you are poor, black and live remote. The same goes for a dental abscess, a lump on your breast, an accident with a macheté. If you can't bring the patient to the doctor maybe bringing the doctor to the boondocks will work, he thought. In 1985 he sold all that he had and sunk it in RAM, initially trucking a bunch of volunteer medics into Mexico for a treatment jamboree. 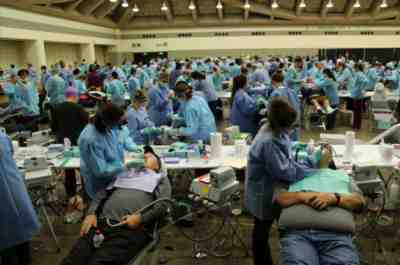 The irony was that access to medical care were worse in parts of the richest country in the world than they were in Guyana, so RAMUSA was set up [above a typical day in the clinic - efficiency privileged over privacy]. The business model is logistical and financial. RAM


There are no reservations, you have to be there to get your chit. If you arrive well before midnight you chances of getting seen are increased. I guess it's not very dignified to camp out for a night: you have to need the treatment you are going to get.  RAM recommends that you look at the weather, dress appropriately, bring iron rations and something warm to drink, because it could be a long wait a) to get the precious number and b) to get your bottom in the dentist's chair.

Stats: 740,000 people treated since 1985, of which 38,000 were adults in 2017 USA. In the US, it costs [2017 accounts] the organisation about $90 per treated adult but they deliver care that would cost $300+ in the open market. The gap being made up by the fact that the professionals are having a bus-man's holiday. For which much respect. As previously to David Nott and my pal Mac the Knife and The Boy's pal Christine.

Posted by BobTheScientist at 06:56