Despite the non-overlapping magisteria, you can respect scholarship even if it adheres to different standards than your own. The scientific method is A way of knowing what makes the world tick, but science is really not much help with compassion, intuition, dance or painting. Lera Boroditsky suggests that maybe the best way to understand how people tick is to read Jane Austen. Now here's a statement "A small advantage of inquiring into the history of almost a thousand years ago is that one is permitted to speculate on possibilities without necessarily having any evidence beyond reasonable plausibility". Harrumph, with those rules you can never be wrong, but it doesn't matter so much if you are. Although I suppose you could imagine a scenario where an ancient manuscript is re-interpreted to allow polygamy among Christians which sets off a jihad led by people who firmly believe that only followers of The Prophet are allowed that extra expense. That's not to claim that my science has been 'useful' but in general science is more open ended than historical research. There's a lot more to know about Isopods than Isaiah, for example and let that be a lesson to you when picking your specialist subject on Mastermind.

That sketchy statement about low standards of evidence is clipped from a great fat tome Meetings with Remarkable Manuscripts by Christopher de Hamel, published by Penguin in 2016. It's more that 600 pages long including 50 pages of notes and references in minute font with few line-breaks and no white space. It's like suddenly the price of paper rocketted but all the notes were deemed essential. The manuscripts are literally that - written by hand on parchment hundreds of years ago before Gutenberg and Caxton started making identical copies of books. Whatever about paper at Penguin today, parchment was hard to come by, therefore expensive, and not the sort of stuff you'd crumple into a ball and throw into the bin if you made a mistake. Each piece was made from a single bit of animal skin: de-haired; scraped of fat and connective tissue, soaked in various noxious substances and then strrrrretched on a frame to dry out. While stretched, the hide was scraped to remove any remaining gunk, but also to reduce the thickness of the sheet. Under tension, a little nick in the skin was likely to open out into a gaping wound. This sort of damage is found, even in the best quality illuminated manuscripts, but repaired with a neat line of cross-stitch. 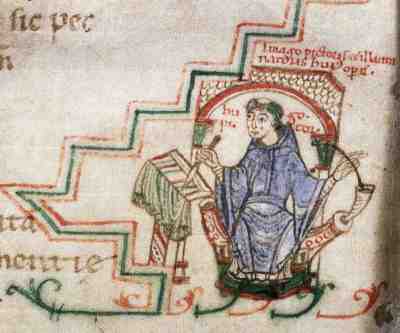 However much the raw product cost, the parchments, which have come to the attention of Christopher de Hamel after 500 to 1,500 years, have had their value immensely increased by their decoration. Hundreds of hours of painstaking writing with a quill pen, not to mention the illustrations. In my late teens, I wrote out pages and pages of poetry, so I know that you can get in the zone with the lettering and that it is quicker to write neatly than be scraggy. But the art work would be beyond me. The picture above is one of the very first self-portraits: the red letters on either side of the monks head say hu -- go | pic -- tor. We know that, as well as the illustrating, Hugo also wrote the text. Not least from the picture itself, where Hugo shows himself dipping a quill in an ink-horn with one hand and scoring a page with parallel lines with the other.

The book in which this delightful insight appears is a commentary on the book of Isaiah by St Jerome currently residing in the Bodleian Library in Oxford. If you look carefully at the book, you'll notice that it's written with 4 different hands. Actually if you or I looked at the book until cross-eyed we probably wouldn't make this inference, but de Hamel has been in the ancient manuscript business for more than 40 years. Appraising them for 25 years in the last century for London auctioneer Sotheby's and since 2000 as Librarian of Corpus Christi College, Cambridge. He has ‘ . . . probably catalogued more medieval manuscripts than anyone alive,or indeed than anyone has ever done.’  With that embedding he can recognise the important diagnostic variants, so he could put a credible date and author on whatever came across his desk and write catalogue notes that would put the find in context and sell-it-up by association with other famous old books. Dates are inferred from the content: there is an up-tick in calendars flagging St Thomas's Day only after Thomas à Becket was murdered. At the other end, it's rather difficult to sponsor a book and get acknowledged with a grateful thanks if you are dead. But dates are also inferred from the style: up until 1230 monks wrote above the lines they scored on the page; after that date they started the text under the top line. This fashion swept through Europe in a handful of years. Provenance can also be tied down to distinctive differences in hand-writing: there is an English style of lettering and several variants of continental which experts can recognise. 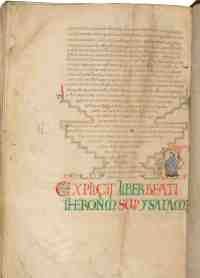 The Commentaries on Isaiah is now in Oxford but it was earlier catalogued in Exeter but not made there: the style is wrong and the hand is not English. Which hand? Well none of them are English and only one of them is Hugo's. Which? If you start making one assumption (rather than getting out a Ouija Board and asking Hugo's spirit) that all the pictures are by Hugo because he was The Whizz when it came to the colour supplement. Then notice that the earlier folios have been lettered first leaving a space for an illuminated initial (and a note specifying what that initial should be). In the last sections of the book the designs are integrated with the letters; rather than shoe-horned into a space written by someone else. This is nowhere better shown than on the page including the selfie [L], the last page in the book, where Hugo is neatly tucked into and integrated with the zig-zag pattern with which he has chosen to wrap his masterpiece.

I'll give another example of how encyclopedic knowledge, perseverance and luck can fish a candle out of the darkness. de Hamel is in Denmark consulting the Copenhagen Psalter from ?1160?. On one of the blank pages in the prayer book, someone has compiled a list of holy relics: Reliquiarum enumeratio:

The first line starts tantalizingly with Has reliquias possidet [these relics are owned by] and the rest of the line has been scraped clean. If you could only identify the owner - presumably a Nob who will have some kind of historical presence - you can not only date the list and hence the psalter, but get a clue as to where it was stored when Lord Blanko had the list compiled on a convenient page in the same room as the bits and bobs. But the line hasn't been erased as well as intented: you can  make out the letters with ascenders -bdfhl- and as importantly text with no ascenders. The first three letters can be made out as d[omi]n[u]s = dns, so Lord Blanko not King Nullo nor Bsp Halo; all you have after that is some ascenders and a lot of spacer-letters and it's all in medieval Latin. It's as if you saw this at the top of the page.

If your life depended on it and you had 20 minutes you could probably work out whose name has been scrorched out by a jealous blogger.  de Hamel's solution to his erasure is dns uualdemarus apud ringsta[dium] = Lord Waldemar [the Great] at Ringsted.

Ah go on, get Meetings with Remarkable Manuscripts out of the library, you'll feel much cleverer after reading a couple of chapters.
Posted by BobTheScientist at 07:24