No booze is good booze

Mighty new study, sponsored by Bill & Melinda Gates, and published in the Lancet indicates a) the alcohol is detrimental to your health [no surprises there] and b) a tiny amount of alcohol is detrimental to your health. According to them, the only safe level of alcoholic consumption is no alcoholic consumption and the best solution (plonkodrain) for a healthy future is shown [L]. This is a bit unfortunate for those of us who like a glass of wine - to celebrate the end of a hard week at work, for example. We have been justifying this preference with the studies showing that moderate amounts of red wine can help reduce cholesterol-driven cardio-vascular events. Actually, if you live in The West [countries binned into High SDI Socio-demographic Index: the 5-point scale used in the Lancet study] there are "some protective effects for ischaemic heart disease and diabetes". But those wins on the swings are lost on the roundabouts of other adverse outcomes from our "only a small one" policy. For example, women's relative risk of developing breast cancer [UP] as a factor of drinks per day [Across] 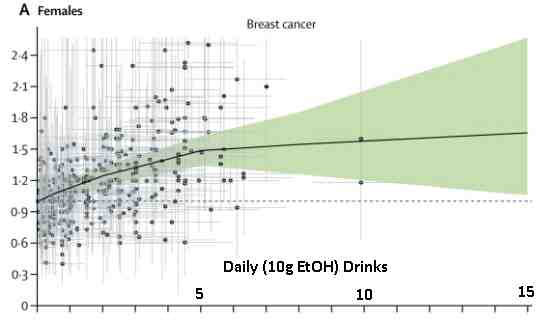 Note: a 700ml bottle of 12% wine has about 65g of ethanol on board. 'Tis a long way from a case/control trial that chart was r'ared, though. Each dot is a country and the forest of vertical and horizontal bars are the associated errors of estimate, so the data on which the Clear Lancet Statements are based are really very noisy. "we estimated the dose–response relative risk curve using mixed-effects logistic regression with non-linear splines" doesn't really help me or my Uncle "Toper" Jim understand how the dots get their positions on the charts . . . and gives us a psychological out - "I'll be okay, there's no history of cirrhosis in my family". 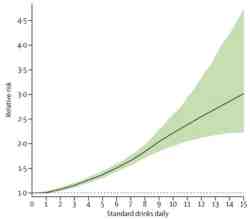 And, contrary to the Headline take-home that NO alcohol is the only safe amount, their own Fig 5 [L] appears to bottom out at 1 unit a day. That picture is the executive summary of the whole meta-analysis of all the negative outcomes of drinking alcohol. The noise has been sanitised summarised by the grey trumpet showing that the variance increases as higher booze-rates are considered. The study is freely available and long, so if you are concerned you should do a keyword search through the full-text of the study to see the connexion between, say, alcohol and Russia: "mortality crisis in Russia is a striking example, where alcohol use was the primary culprit of increases in mortality starting in the 1980s and led to 75% of deaths among men aged 15–55 years". Lots of informative graphics in the paper but all qualified by the noisiness of the data.

I was interested to encounter a new term to match QALY Quality Adjusted Life Year [multiprev] which allows us to quantify the effects of, say, different treatments for cancer. DALY is a Disability-Adjusted Life Year (DALY) which in turn is the sum of Years of Life Lost (YLL) and Years Lost due to Disability (YLD). If you survive a year after your alcohol-induced ischaemic stroke but only 50% fit-for-function that's half-a-DALY. I [now] drink very little, because in Ireland it costs very much.
Posted by BobTheScientist at 07:14