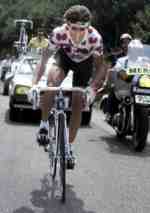 My sporting life has mostly been Advanced Sofa. I do remember, however, sitting through the entire Tour de France 1976. I spend July and August that year watching hexagons of drought forming in the fields outside Wageningen, NL, where I was an intern at Strichting voor Plantenveredeling = The Plant Breeding Institute. It didn't rain for the whole of July. I stayed at the International Agriculture Centre which was a bit like a clean-but-functional hotel and a bit like an up-market hostel where all the visiting scientists were billetted. The IAC is now the WICC and quite a bit fancier than in my day. No Friendface or Netflix or laptops back then; in the evening it was either watch TV downstairs or stay in my room reading De Hobbit with a NL-EN dictionary. There were other channels but the overwhelming majority wanted to see the highlights on The Tour every night. Belgian Lucien van Impe [R wearing the maillot à pois rouges for winning yet another mountain stage] won that year. The doping scandals epitomised by Lance Armstrong were 20 years in the future and now 20 years in the past but they still lower over cycling.

My years of actual cycling were distinctly unsexy: when I worked in Dublin in the 90s, I cycled about 25km a day tooling in and out of work. That clocks up to about the circumference of the world between 1990 and my RTA in 1997. My thighs were mighty in those days. If you have a TV and/or you're Welsh, you will have heard that Geraint Thomas [who he?] from Cardiff who won The Tour this year. He should really be competing in the Special Olympics because he had his spleen removed after destroying it in a spectacular crash in 2005.  His main rival in the TdF this year was Chris Froome, an Englishman who has the same MegaCorp sponsor as Thomas in Team Sky. Froome won the Maillot jaune in '17, '16, '15 and '13. Amazing really because Froome also has a handicap - he's got the asthma. There are a helluva lot of sporty types  who have asthma [6% at the Beijing Olympics] apparently, which is intrinsically surprising, no?  I had asthma when I was a nipper, couldn't run 800m because I ran out of puff and had to walk for a bit after the first circuit of the track. I was fast over 100m and faster over 80m hurdles so I could have been a contender but the asthma just diverted me into other ways of being and I only really participated in sports as a joke.  Not so Chris Froome who doesn't coast downhill but piles it on down: 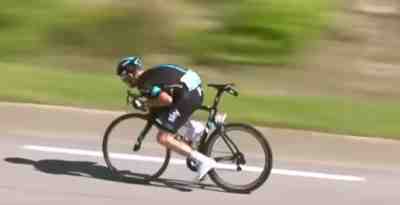 Étape 8 (Pau / Bagnères-de-Luchon) - Tour de France 2016
There is, therefore, a teeny suspicion that all those asthmatic cyclists are gaming the system by pulling-a-sickie in order to access salbutamol inhalers. Salbutamol inhalers are allowed in sport in order to level the playing-field for asthmatics by equilibrating upwards, like the EU, rather than give one athlete an unfair advantage over their competitors. In order to use an inhaler you have to apply for a Therapeutic Use Exemption (TUE) signed off by your doctor AND keep your use below a certain threshold.
Q. Why would you want to use Salbutamol if you weren't really asthmatic?
A. Because the drug acts as β2 adrenergic receptor agonist, relaxing the smooth muscles of the bronchioles and allowing you thereby to whoop more air into your lungs when they really want to shut down in a spasm of exercised-induced asthma EIA.

During the Vuelta a España last year, which Froome won, WADA, the World Anti-Doping Agency took a urine sample from him which was about 2x over the threshold [which is 1000ng/ml or rather 1200ng/ml because WADA adds 200ng 'for luck' to arbitrarily raise the bar in favour of the athlete] for Salbutamol metabolic products. Accordingly, the Union Cycliste Internationale UCI declared an "Adverse Analytical Finding" (AAF) and stripped him of his medal.  Froome and his backers - Team Sky and every person who ever waved a Union Flag - declared stoutly that he had done nothing wrong and the AAF didn't take into account dehydration, and started an appeal process. This response reminds me uncomfortably of how The Patriarchy talks very loud about due process and the presumption of innocence when celebrity males are accused of molesting women. Froome is now rich, Team Sky yet richer, and they can get the best lawyers, pharmawhizzes and publicists to make the best possible case.

Froome apparently submitted a 1500 page report to convince himself that there was sufficient doubt that his urine sample was over the limit. I say 'apparently' because the report is not being released for scrutiny by the public. A month ago on 2nd July 2018, the UCI caved in and closed down Froome's case; effectively exonerating him. WADA acknowledges that everyone is different, and that there could be people who have a physiology which breaks down a normal therapeutic dose <puff> in a peculiar way so the urine sample looks like <puff><puff><puff><puff>. The urine sample is, in any case, a single snapshot even if divided into an A and B bottle. What WADA recommends is a controlled pharmacokinetic PK regime whereby the suspect is allowed to reproduce their 'normal usage' under controlled conditions and show that <voilà> this results in a AAF. That's a lot of work even if you were going to do such a study on lab rats, you can't easily replicate Froome's circumstances immediately before and after stage 18 of La Vuelta last year. You can't even remember what you ate for lunch last Tuesday. Whatever: the UCI waived that requirement in this case. You can bet your sweet bippy that the next perp in a doping scandal is going to have her lawyers subpoena Froome's submission because it appears to be powerful magic.

The current issue of Br J Clin Pharmacol has a timely and relevant report out of Centre for Human Drug Research, Leiden: Futility of current urine salbutamol doping control.  Title says it all!