As far as we know, everyone, even Ahasuerus, Methuselah and Dorian Gray, dies. In the Western World we have a quite unaccountable desire to live forever even if that is developing bed-sores in an oxygen-tent surrounded by blinking lights and fluid-in and fluid-out bags. A quite phenomenonal amount of money is sunk into those final few degraded and often degrading weeks.  In the last 50 years the US tax-payer has decided to cough up a lot of tax-dollars towards fighting things that kill.  Actually, of course, Joe Blow, 1245 Milwaukee Bvd, Detroit, MI has absolutely no input in where and how his tax-dollars are spent. That is left to policy and advocacy.  A major policy/political decision was the War on Cancer, kick started by President Nixon with the National Cancer Act of 1971.  That came about because of persistent barracking by wealthy Mary Lasker whose husband Albert had died of colon cancer in 1952.  Her support of the National Cancer Institute, National Institutes of Health NIH, implementation of the Lasker Award for excellence in medical research and, as I say, relentless advocacy helped drive the support for cancer research to balloon from $2.8 million in 1946 to $1.4 billion in 1972  = 500x!! 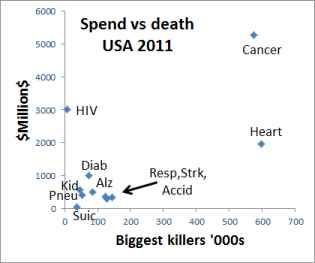 But wait, I'm right sorry for Albert Lasker: colon cancer is a dreadful way to go, but other things kill Americans too.  I was reading an old copy of Science and came across some plottable data about the relationship between number of deaths and number of dollars for the ten causes which kill most.  The original snippet is paywalled, so you'll have to trust my graph [R]. If life was fair [it's not] or ethics and economics were utilitarian [they could be] these dots should form a straight line: the greatest killers should be whacked with the greatest sack of money. It's reasonably close: the correlation coefficient between the two variables is 0.85 but there are also some notable anomalies.
Noting that hardly anybody dies of HIV/AIDS is callously utilitarian. Bad as colon cancer is, having your immune system beaten to its knees so that you are assaulted by a pestilential zoo of fungal, bacterial and viral pathogens is no fun at all.  But as a society we can put these things into perspective by counting. In a rational society we might use the numbers to inform our decisions rather than only listening to the shrillest voices or getting sentimental about the most tragic story dug up by reporters in a slow news week.  The top two killers in the US are heart disease and cancer which between them account for 45% of deaths.  A long way afterwards come chronic respiratory diseases; stroke; accidents; Alzheimers; diabetes; pneumo/flu; kidney failure and suicide.  Of these suicide, which seems to yield to quite low-tech solutions [compassion, neighborliness, anti-depressants] gets the least support from federal funds.

Although it is American tax-payers who support the US program for HIV/AIDS research, it is perhaps rather blinkered to count just the US impact of this dread disease.  On a global perspective, HIV/AIDS killed 1.5 million people in 2012, making it the 6th horseman of the apocalypse, edging infectious diarrhoea to 7th place. Both these killers are falling steadily down the rankings; the former as fancy expensive drugs are getting a better distribution in the third world. Quick quiz: which of the following is not used to treat HIV/AIDS: 3TC ABC AZT DLV ETR FDA FTC NVP SQR TDF?
A. All except FDA - the Food and Drug Administration which oversees the licencing.

To put the 7000 US deaths from HIV/AIDS in perspective, Clostridium difficile infections alone, most acquired in hospitals, kill 7,700 each year.  Right at the beginning, between 9,000 and 10,000 children are born with some congenital abnormality and check out before life really starts. But all of these are in ha'penny place compared to Parkinson's [N=25,000] and Liver failure [N=36,000, half of which is alcohol-induced].  Liver disease is of the same order of magnitude as deaths from road-traffic accidents [N=35,000] and fire-arms [N=34,000, of which 11,200 are homicides].  And it's also interesting to note that 30,000 are finished off by falls.  If you have elderly parents, this is where you can intervene to help prevent: stairs, trips, trips on stairs, trips over dogs or loose carpets, slips in the bathroom or kitchen. In 2013, 516 US citizens were killed by 'legal intervention'. Which strikes me as rather a low proportion given that 16,000 homicides are perpetrated each year.

Interestingly, according to my source at the CDC, despite obesity being a leading preventable cause of death, nobody dies of this condition. The obese die from diabetes, heart disease, stroke, liver-failure and occasionally from a spectacular fall.

Posted by BobTheScientist at 06:33