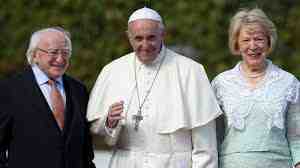 Unless you've been living under stone or in a no-nothing state of protestant denial, you'll know that the current head of the Roman Catholic Church, Papa Francesco [above with our President & Mrs.], is in Ireland this weekend on a whistle-stop tour for the faithful. They are anticipating 500,000 ticket-holders to be present at a Mass in Phoenix Park at 1500hrs today Sunday 26th August 2018. As there were less than 1,500,000 people actually attending mass on any random Sunday this year, the Pope will also be addressing a horde of rubber-neckers as well as the faithful. Tickets are all gone now, but were free. At least one counter-catholic group planned to order tickets and then throw them in the bin to make the event more damp than 20mm of overnight rain has made it. I missed the last "zhung people of Ireland" papal visit to Ireland because I was abroad but I caught him going past in the popemobile at Boston Common the following day 1st October 1979 - I've got the t-shirt for that . . . somewhere.

Ireland has changed a lot since then: faith for a lot of people has gone down the toilet with mother-and-baby corpses; Magdalene laundries; cassock-gropings and other crimes and cover-ups. Contraceptives are now easily [not freely!!] available, so we are not expecting an up-blip in the number of births at the end of May next year; like there was supposedly after a night of ecstatic bonkings in 1979. John Paul was very common name-combo in 1980s baptismal records anyway.

Another change is that this time there is an anti-pope. Or at least a meeting nearer the centre of Dublin in which a group of people, whose common ground is disquiet about the unassailability of the Catholic Church in Ireland, are coming together to provide an alternative view. There will be people driven by
It's not too late to get to the Garden of Remembrance at the top of O'Connell Street, where Dau.I will be among the faithlost of #Stand4Truth. One of the main movers is Darragh "Foodcloud" Doyle. Infotweet here. Also appearing:
Now let us pray.

Posted by BobTheScientist at 13:21