On Friday, our last full day in Bath with the bold Gdau.I and Gdau.II, we went to Carters Steam Fair in Royal Victoria Park.  It was a peculiar anachronistic experience: solidly Edwardian in the action but all wired up in the booking: if you sign up the day before then you get a wodge of extra "free" ride-tokens. It's your reward for committing to go against the uncertainty of British weather. The carnies at Carters have to have tea, toast and sausages every day for breakfast and if no punters turn up because it's drizzzzzling again, then the smaller employees go hungry. I should add that Carters dont believe in apostrophes.  This is what it looked like as Gdau.I and a tiny Gdau.II (held on by her mother) whirled round and round and round on the galloppers: Edwardian-gaudy painted horses which are cranked up and down by an eccentric crankshaft as they rotate: 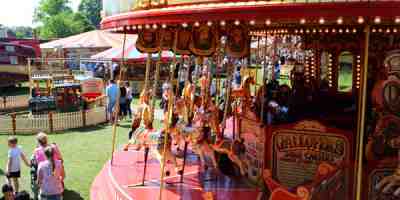 Carters is not the ideal place to hang out if you are a bit republican in sentiment: the portraits hanging from the roof of the galloppers are all of the British royal family. And union flags and other patriotic sentimentalia are everywhere you turn. But doing turns on a carnival horse is reasonably demure in its action. There are at least two other rides where the centrifugal force gets mightily cranked up: one where you get whirled round in a car whose axle is itself whirling round a central point and another where you sit in an open seat and get hurled round faster and faster until you feel almost horizontal. We all agreed that those rides should be completed before a feed of ice-cream, dodgy hamburgers and onions: a technicolour yawn is no fun to encounter as it falls at high speed from a great height.

We learned from our Wild Place experience to bring our own sandwiches for lunch and after an hour and a half of Victorian fun we decamped to the park, sat on the grass and had a picnic. An hour and a half is, like Goldilock's porridge, just right. Then we walked into the edge of town to visit the (free-in) Assembly Rooms which was a lot quieter, positively Jane Austen in sense and sensibility, and had clean toilets. On the way back to the car we met an ice-cream van and just had to support another small entrepreneur. Now me, if I was tasked to entertain a couple of small children for the day, would most likely have them whittling sticks to dig for worms in the back-garden: more palaeolithic than Edwardian or Victorian. But I got my druthers in the evening when Gdau.I took me out blackberrying. I had work-pants, a gauntlet and a sweatshirt against the thorns; she left home in a singlet and shorts. I finished up with more blackberries than my granddaughter because a) I was dressed for the fray b) I'm really competitive c) I can reach higher d) she ate half of the berries she picked.
Posted by BobTheScientist at 07:44