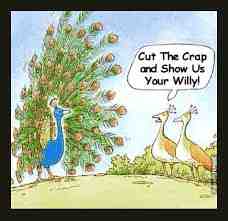 For many evolutionary biologists, Darwin's second big idea was not about the origin of coral reefs, but rather an explanation of such peculiarities of the natural world as the tails of peacocks Pavo cristatus. My correspondent G was kind enough to send me the cartoon [R] about 30 years ago: clearly it has been difficult for me to shake the image from my strutting patriarchal mind.  Darwin reckoned that sexual dimorphism " . . . depends not on the struggle for existence, but on the struggle between males for possession of females . . ." even if the attributes which attract females make the males potentially attractive to a wider variety of more voracious predators. It's hard to escape from a fox if you can barely get airborne. It's not just peacocks: deer with an inconvenient coat-rack attached to their heads; monkeys with absurdly rainbow-bright bottoms. We can tell things about the behaviour of animals even if the only specimens are in the Dead Zoo. We've documented on The Blob that human males are bigger than females: bigger feet, bigger upper-body, bigger beard. The irresistible conclusion is that blokes strut and throw shapes and that girls pay attention to their antics. But . . . competition for mates is not as important a drive in us as it is in gorillas with their big heads, sagittal crest, mighty brows and 2x M v F weight differential.

Another take on the over-blown extension of sexual attractants (feathers, horns etc.), which was first proposed by Amotz Zihavi in 1975, but popularised  Richard "God-hater" Dawkins is that the 'extras' are not so much about run-away selection for these attributes. The handicap hypothesis rather says, basically, look at me girls, I got a ton of feathers and a bright-pink head and I can still fly and haven't been swatted by a hawk; I must be well fit, fancy a shag? 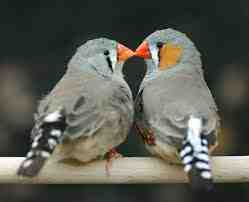 You can make all these observations, add your opinions about why these peculiar traits have evolved and convince yourself that you've explained <tick, done that> that aspect of the natural world. By convincing an editor and two referees you can secure another publication against your ambition for tenure at Harvard. How much more convincing this Just-So story would be if you could artificially manipulate the world and show that your changes made a difference in the mating game. In the 1980s Nancy Burley noted that the coloured bands put on the legs of the birds = zebra finch Taeniopygia guttata [L half an ounce 12g each of super-cuteness] she was studying appeared to have such an effect. Red leg bands appeared to enhance the attractiveness and the reproductive success of male finches, while pale green bands were a total bust in sexual politics. Further studies appeared to support this hypothesis and soon enough these now iconic ideas worked their way into text-books of Ecology and Evolution. It seemed to show that sexual preference was lurking just beneath the surface and can hook on to whatever small difference can be detected by the opposite sex. Those small-small differences will get more distinct and enhanced if more offspring come to the odd-ones. When data is consonant with theory it is just more easy to get it published. I told a story of a gamma-male chimpanzee who upped his pay-grade by using a kerosene-drum to act bigger than his god-given muscles.

The pendulum bounced about as scientists tried to replicate these findings, some getting supporting data and some, like Aurelie Seguin, Wolfgang Forstmeier in 2012 finding no effect. Forstmeier was at it again in March of this year, doing a comprehensive review of the field and doing a meta-analysis of all the published data. It's the sort of idea which is hard to kill - because theory and observation collide - and having shown that leg-bands are irrelevant in zebra finch, there will be hold-outs claiming the effect in one of the other 8,000 species of bird. Not much different from the ding-dong battles about whether vultures detected dinner by smell or vision - the answer being both, because there is more than one species of vulture.

If you're really interested in the issues of bias, special pleading and uncritical thinking, you could do worse than read the summary of Forstmeier's jihad and its context by Yao-Hua Law in The Scientist.
Posted by BobTheScientist at 07:40