Slocum in the Cocos 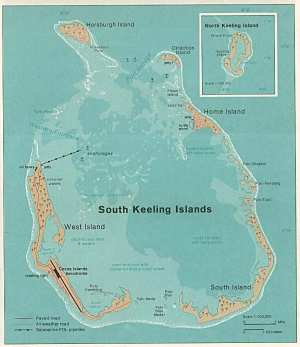 For some scraps of land barely 5m above the tide-mark at its highest point and only 14 sq.km in extent, the Cocos/Keeling Islands [R 12.12°S, 96.90°E] have had rather a lot of history. The archipelago was discovered in 1609 by William Keeling while employed by the East India Company.  It seems likely that Chinese, Malay and Arab sailors had been there, but the islands remained uninhabited until the 19thC. In 1814, a passing merchant called John Clunies-Ross ran up a Union Flag on one of the islands, claiming it for Britain and also for himself as a tropical island retreat. By the time he returned with his family and building materials, Alexander Hare, another eccentric Brit had installed himself there with an extensive harem of exotic women. There was a bit of a rumpus until Victorian moral values (and a couple of handfuls of younger buffer sailors in the Clunies-Ross party) saw off the degenerate fifty-year old Hare, who sailed away into the sunset.  The Clunies-Ross family is still living out there although the territory was annexed by Australia many years ago to bring the governance, human rights, rule of law into the 20thC.  It's not quite a micro-nation because it is not fully independent but it is micro: having a population of about 600 people, some of Malay and some of European descent.

A few years later HMS Beagle dropped anchor in the sound after her voyage round South America and the Galapagos Islands.  Charles Darwin had been cogitating about all the data he'd gathered and rather inadequately documented. He famously labelled all his Galapagos finches as "Galapagos" and the date, so was unable to twig that each island had a different set of birds. Arriving at Cocos/Keeling, he had time to explore a classic coral atoll [above] with barrier-rim islands surrounding a shallow lagoon. The water depth typically plunges to the abyss a short way outside of the circle of dry land.  Darwin knew that coral was the skeletal remains of living creatures and that they depended for the growth on light.  How, he asked, could this massive pile of solid matter have grown from the darkened depths?  One of his first scientific papers on his return was The structure and distribution of coral reefs in which he put forward an explanatory hypothesis.  Darwin suggested that the coral massif had started growing long ago in shallow seas and that, as the sea-level had risen and/or the sea-floor had sunk, the coral growth had been sufficient to keep pace. It required a helluva long time and suggested a certain restlessness in the earth and so was moderately controversial when published.  It has since become accepted as the only reasonable way in which these wonderful rich colourful biological communities had come to develop.  Better go visit them soon because climate change and pollution are doing a fatal number on many of the best examples.  This is another example of Darwin being firstest with the correctest: as he was with earthworms, barnacles, deaf cats, pigeons, plant hormones, animal emotions . . . the list goes on.

The next round-the-world voyager whom we know to have called in upon Cocos/Keeling was Captain Joshua Slocum, who circumnavigated alone in his self-built gaff-rigged sloop the Spray. That kind of thing is widespread nowadays with all sorts of gimmicks added to make the venture 'new': A Short walk in the Hindu Kush, In Ethiopia with a Mule, Brazilian Adventure, Round Ireland with a Fridge: some of these books are better than others.  Slocum was born within the spray line of the Bay of Fundy in Nova Scotia, ran away to sea in his teens, taught himself navigation and command and made a living transporting this and that from here to there in sail; oftentimes he had his wife and kiddies aboard. In his 60s, he left his family ashore and set off for further adventures - hoping to turn his account to account with a publisher upon his return.  The story is marvellous, partly in the sense of being a good read and partly in a sense of a bit of a yarn.  The consensus is that Slocum was not above stretching the truth for the sake of the tale - and why not??

He had a near-death experience while visiting Cocos after being swept out to sea and only making it back to land through a combination of the enterprise and pluck you'd expect of a bluff Canadian Maritime sea-captain.  He took a trip across the lagoon in another scarcely seaworthy boat with a local pilot to secure some giant clam-shells Tridacna gigas as souvenirs or trade-goods. A sudden squall thrashed the sail to ribbons and he found himself drifting out to sea without oars or anchor or water or ship's biscuit.  The only implement was a pole with which he was able, by superhuman exertion, to propel the craft back into the shallows.  He secured his clam-shells the next day - 30 of them replacing 3 tons of ballast.  Yup that's right: 100kg of clam - makes a helluva chowder. Ten years after his return from the epic voyage, he set off from New England to Winter in the Caribbean and was never heard of again.

That's the peace-time highlights of the history of Cocos/Keeling. The boys among you will want to follow the adventures in:

Posted by BobTheScientist at 06:29