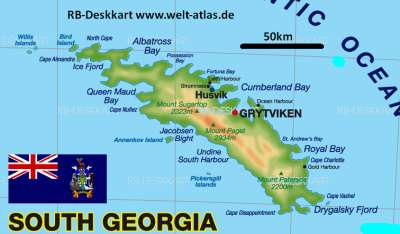 South Georgia is cold, damp, wind-swept island in the South Atlantic, it is not the sort of place you can visit casually to put flowers on the grave of a dear departed. 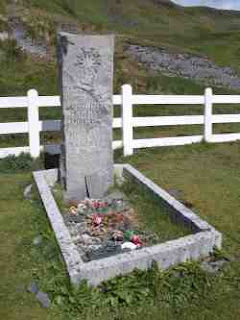 Ernest Shacklelton, [prev] Antarctic explorer, born in Co Kildare, died aboard the Steamship Quest 5th January 1922 while it was moored in Grytviken Harbour, South Georgia. The crew sent a telegram to his widow and she asked them to bury The Old Man her husband on South Georgia rather than immersing the body in brandy and shipping him home like Nelson. I've crossed out The Old Man because he was only 47 years old. He could have died 6 years earlier, doing a daft desperate sledging trip at the end of his heroic voyage to South Georgia in 1916.

Sixty years later, Suboficial Primero Félix Artuso was killed in Grytviken Harbor on 26th April 1982. This occurred at the end of Operation Paraquat during La Guerra del Atlántico Sur after the Brits had reconquered South Georgia from Argentine forces. Artuso was a prisoner of war helping move the damaged captured submarine on which he had served as a Petty Officer. The Royal Marine squaddie, who a) was guarding him b) had no Spanish and c) zero knowledge about how to run a submarine, thought Artuso was attempting to scuttle the captured prize and/or fire torpedoes at the victorious warships. He emptied half a clip of 9mm into the unfortunate Artuso's head. Nobody was held to account for this violation of the Geneva Convention unfortunate dreadful misunderstanding. Félix Artuso is buried [pic] a few metres from Shackleton [his arty gravestone shown R] in the cemetery at Grytviken.

I guess even at this distance of time and place, people are still mourning the loss of these two men. Pictures of the graves show changes in the floral tributes, for example. I think it's safe to say that nobody is sorry that the last invasive alien rodents have been culled from South Georgia. This news percolated slowly through some rarified channels of the blogosphere after it was announced that they could find no evidence of living Mus or Rattus. The rodents were introduced by Cap'n James Cook, who surveyed the archipelago and landed a Possession Bay in January 1775. If not by him, then by the sealers who came immediately after the news of the discovery came back to Europe. I cannot (easily) find Latin binomers for the invasive rodents so I am assuming  Rattus norvegicus, the brown rat, possibly Rattus rattus the ship-rat and definitely Mus musculus, the house mouse. The latter were the least serious because a) they are smaller than a penguin egg b) they were at the edge of their habitat, with between 2 and 6 individuals /hectare.

The project to eradicate all the rodents cost £10 million and 10 years of elapsed time. First they surveyed the island to find out where and how the aliens live, then they devised a killing strategy that has to be100% effective. Leaving even 1% of the rats alive will just reset the clock. They decided to distribute poisoned bait on all the likely habitat. It was known that rats don't live actually on glaciers, for example. They ended up distributing 300 tonnes of poison bait over 3 years 2011, 2013 and 2015 with the help of 3 helicopters carrying a modified fertiliser hopper back-and-forth across [video] just over 1,000 sq.km of tundra. That's about a third of the total area of the island. Two years, after the last run across the killing fields, it was time for another survey looking real hard for now elusive rodents (they'd taken a hammering from the poison. They used peanut-butter baited cards attached to red-topped stakes: any teeth-marks in the paste and it would have been a £10 million bust! They also walked 3 primed rodent-sniffer dogs - Will, Ahu and Wai - to snuffle down any burrows and crevices. [pictures]. Just like the Brits, they report the names of the dogs but not the proper names of the prey.

This is a huge logistical problem, successfully addressed. I can't find our eight sheep on a hill of only 200 hectares. These dogs couldn't find any rats in 100,000 hectares but that's good news. Hats off!