Island of the Grace of God 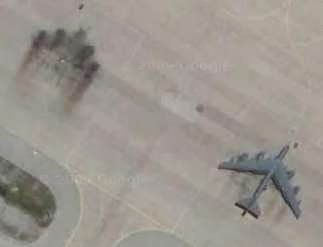 This is part of an aerodrome.  It is place of rather rigid behaviour - the missing plane on the left must have been parked exactly there, +/- a couple of meters, dozens and dozens of times.  Where is it now?  Probably tooling around in the sky with a payload of explosives, because it is the turn of that plane and that crew. Where will it be when it lands?  On dry land but a very long way from any continental land-mass: Tanzania 3650km W; India 1800km NNE; Australia 4470km ESE.  It's one of several places that is rather sensitive to global-warming sea-level rises, as its highest point is a towering 9m above average low tide levels; and that's the top of a sand-dune - a feature not known for its permanence.  Actually it's not really very dry land because it gets a sopping 250cm of rainfall annually about 3 times more than we get in drizzly ould Ireland.  The island has been called a variety of names according to ancient maps, including "I. de Dio Gratia", from which the current name of Diego Garcia derives.

The abundant rainfall creates a rather interesting hydro-geological formation - a Ghyben-Herzberg lens of fresh water which, by being lighter that the surrounding salty sea-water and protected from excessive mixing by the local porous rock, floats near the surface and is available in shallow ponds, springs and by drilling wells.  Here's a diagram of Guam, which has a similar situation. 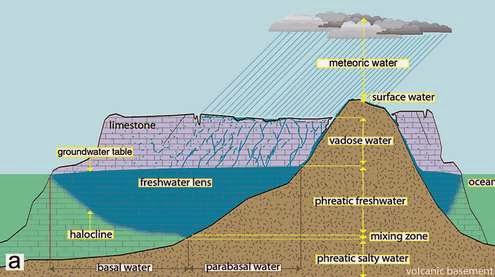 Both Guam and Diego Garcia  are tropical atolls where a lagoon of sea water is surrounded by a coral reef which keeps growing up as the underlying mound on which the coral started growing sinks down.  This explanation for the existence and maintenance of coral reefs/atolls is yet another First for Charles Darwin. "It was Darwin’s genius to see that coral reefs, although plainly geological structures on a stupendous scale, were created by slow, gradual growth of countless billions of tiny creatures over vast periods of time."  That Darwin, what a guy!

You have to be a little delicate when abstracting fresh water so close to the sea, because if you deplete the fresh water, or there is a slackening of rainfall, there may be a catastrophic influx of sea water that will take life-times to push down and away again.  The water pressure and the relative densities mean that the lens extends below the tidemark 40x as much as it extends above into those ponds and springs.  You cannot, for example drill vertically down from the centre of the lagoon, where the lens is deepest, because that is likely to precipitate a mix-up.

When Diego Garcia was finally settled by fisherfolk and copra harvesters, the fresh water supply wasn't a problem because the people didn't have flush toilets and washed in the lagoon.  The government of the United Kingdom acquired Diego Garcia and the rest of the Chagos archipelago from their colony of Mauritius in late 1965 just before the latter achieved independence within the Commonwealth.  They paid £3million, which was a number they must have pulled out of the air and about which present day Mauritians call "No Fair" while claiming sovereignty over Diego Garcia and the neighboring Chagos Archipelago.  It was a good investment for the UK because they promptly leased Diego Garcia to Uncle Sam and got a $14million discount on the purchase of Polaris nukes from . . . Uncle Sam.  Not so good for the inhabitants, because the US required a green-field site to develop as a Middle Eastern oil over-watch fortress.  So the plain people of Diego Garcia were rounded up by their 'protectors' in 1971 and forcibly settled elsewhere.

They were replaced by up to 5000 US military personnel and hangers-on, who have an insatiable desire for fresh water to flush, to freshen-up regularly, and to wash their cars, jeeps and B52s.  A quick glance at the figures don't look too bad: each day, half a million litres of water shared among, say, 3500 personnel gives a rate of 160 lt per person per day which is about the same as Stateside. My figures show household water consumption in USA is 425lt/d which is about double that in UK and three times what they get through in Germany, France or Israel. This is a lot of abstraction of water but the average replenishment rate from tropical downpours is 10 million litres per day, of which an estimated 40% percolates through to the lens.  But as the abstraction occurs in a rather concentrated area of the atoll, sea-water infiltration is more likely than if bore-holes were spread more widely.

There is a rich and diverse wildlife on 170 sq.km of the atoll, which is rebounding after the eradication of destructive feral dogs (Canis familiaris) donkeys (Equus asinus), horses (Equus caballus), and house cats (Felis catus).  But you're unlikely to get to see any of these recovering tropical species unless you're US military or you've been picked up in a Black Op for some waterboarding on territory that isn't sovereign USA (which disapproves) but isn't under the effective control of the UK (which also disapproves) either.  So not a million miles from Shannon Airport: only 10,000km; and a long long way from the Grace of God.
Posted by BobTheScientist at 02:19