I am having a pandemic that couldn't be beat w.r.t. the impact it's having on my life. In the Before Times, when I was alone on the farm at weekends, with the Little Red Yaris waiting for my whims in the yard, I'd often find an excuse not to go off-site and spend the whole Friday-to-Monday pottering about with shovel and saw. But it is getting wearing that I cannot go beach-combing; a pastime which involves solitary, outside, physical exercise . . . and cleans up the foreshore. So many tasks on the farm would be more difficult without an inexhaustible, every-sized, supply of rope and cordage scavenged from the tide-line.

When Borrowbox, the free audio-book gizmo provide by the Irish Library Service, suggested Mudlarking by Lara Maiklem [reviewed], I was all over it like a rash. Obviously there is overlap between the two professions, but I go big on brightly coloured buoys which are rare on the tidal reaches of the Thames. Over the last 30 years, I have gotten to know the nooks and headlands of Costa na Déise aka The Copper Coast. Over a similar time-frame Maiklem has developed an intimate knowledge of the 40m x 40km strip of mud-and-rubbish which is exposed between high tide and low from Erith to Teddington. Like a gambler who wins big on a teenage plunge on the Grand National, Maiklem was hooked by pulling an evocative chunk of history from the grey mud while walking beside the river. She has gone back to that well countless times over the last 20 years.

The second chapter uncovers the lost type of Doves printers and font-founders which I riffed on six years ago. She has a , which manifest itself as she scanned across the foreshore surface in a zen-like state looking-not-looking for something that was out of place and so perhaps interesting. What a coup! A physical link to William Morris, and the pre-Raphaelites . . . if that's what floats your wherry. 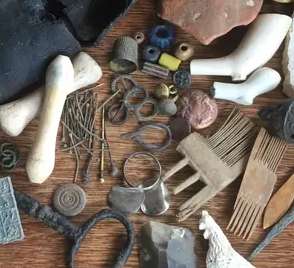 Mudlarks can be characterised as The hunters are all about trove, gold and value. Gatherers focus their interest on their own niche of expertise: beads, buttons, bellarmines, buckles. There are particular reaches of the river where clay pipes or, more frequently, just pipe-stems are to be found. Those in the know can source you a generous handful of tiny garnets which may have dispersed, not too far, from a foundering East Indiaman. For the hunters enough is not as good as a feast; because there is never enough. Which is really sad because for sure you can't take your golden trash with you when you go.
Maiklem's style is so engaging, I started to think Heck, I could have a go at that. But the later chapters dig into the nightmare of today's Thames beaches: especially seepy after a spill of rain has caused Bazalgette's Victorian sewer system to overflow into the storm drains and spill out into the river. Then the fore-shore is covered with drifts of Q-tips, mats of wet-wipes, condoms, tampons, dental-floss and fatberg concretions. The medieval pins and roman hypocaust bricks are underneath this shite. I'll stick to Trá na mBo, thanks; the air is fresher

Mudlarking is a wonderful book: poetical, insightful, informative and evocative. It emphasises that the contemplation of the universe is fractal. Maiklem's late style of work is down on her knees sifting carefully through a tea-towel sized horizon of mud. Louis Agassiz got as much out of a Summer on his knees in his back-yard as Mina Fleming and Annie Jump Cannon did counting and cataloging stars.

To see a World in a Grain of Sand
And a Heaven in a Wild Flower
Hold Infinity in the palm of your hand
And Eternity in an hour
Wm Blake Auguries of Innocence
Posted by BobTheScientist at 07:25