Where we live is not everybody's cup of tea. It's a long way from the shops, it's further still from a cinema and rooks are raucous. The pleasures and privs of owning 16 acres and as many sheep comes with the responsibility of looking after them; which is clearly going to require more effort than minding two kittens and a scrap of lawn too small to warrant owning a mower. One of the peculiarities of Our Gaff is that a major route to the open uplands goes right through our farm. You can drive your big-ass SUV all the way to the commonage but if I tried to do that in my Yaris, I'd leave the exhaust-pipe, the oil sump, and trail of wiring on the bumps in the rocky roadway.

Rather than actually living remote, like 340 days a year with a fortnight off for good behaviour, most people choose to live amid the trappings of civilisation and just visit the countryside . . . when the weather is fine or the missus doesn't need the car. I am absolutely fine with that. Our "mountain" is 200 hectares in extent and there's plenty of room for botanists, ramblers and bird-watchers. Just to remember that the whole hill is owned by someone who is trying to scrabble a living from it by raising sheep. Sheep are freaked by the smell of strange dogs, let alone getting the run around from something that looks a lot like a wolf. Visiting dogs are, accordingly tolerated rather than welcomed and as a courtesy and the precautionary principle are required to be on a lead. It's like wearing a mask in public: it's a bore, your glasses steam up; but you do it out of consideration to the more vulnerable and to show willing.

Did someone mention masks? Like we're in a pandemic? One of the key ways of reducing transmission of the virus is to restrict travel except for supplies and emergencies. It is remarkable how many people have acquired a 5km space-time portal [€299.00 on www.amazon.mars] so that they can appear at the bottom of our lane with the travel clock set to zero. From St Patrick's Day through the following weekend, the weather was just wonderful: sunny spells, gentle breezes, not too hot. On the Saturday, I was striding purposefully across our yard when I noticed a young man loitering by the gate to Crowe's: the field of the Ringstone. It was in my mind to make a quip about him standing guard while Herself had a tinkle in the gateway; although I couldn't see any Herself at all. Because, like, purposefully, I didn't say/do anything and promptly forgot his existence. 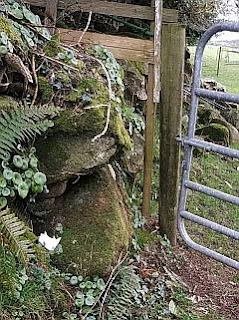 But two days later, after the weekend tide of humanity had washed back to the flatlands, I was going through that same gate and there [L  tinkle tissue ] was the evidence that my unspoked quip would have been mortifyingly close to the truth. What the effedy eff does a grown woman think will happen to the tissue that she leaves behind?  That the butler will instruct the under-footman to dispose of it after he's emptied the Laird's chamber-pot? I tell ya, Downton Abbey has a lot to answer for. Don't get me wrong; the flush t'ilet is the bane of Western water conservation and I'm all for having a pee outdoors but could you please use the compost heap? This is not the first time, I've been treated as an invisible servant. Lara Maiklem has a chapter on how Elizabeth London managed it's 'water' during 3 hr long Shakespearian plays when the groundlings were packed like sardines. Apparently, buckets were passed through the audience and when brimful were sold on to tanners and dyers for an additional income stream for the theatre. And I've riffed before on the fertilising virtues of urine.
Added: Juvenile harbour seal savaged by dog on R. Thames. Dog escapes sanction, seal dies.
Posted by BobTheScientist at 07:49