Who owns the kit? If you have or are given something ex officio - in your professional capacity - do you own it personally or should you hand it on to your successors?  The former Archbishop of Canterbury Michael Ramsey thought various archiepiscopal gifts were his but in the austerity of old age they became burdensome and he dumped a lot of golden clutter into the River Wear at Durham.  Yes, yes, he'd tried selling it for the poor (archbishop).  Having written about that nearly two years ago, and given my thing about beachcombing, I'm surprised I haven't had more to say about combing the foreshore for ancient artifacts. Time to redress that today. 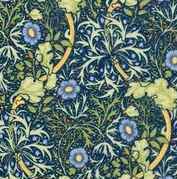 The Beloved has a long-time thing about William Morris and the Arts and Crafts Movement. Morris saw himself as trying to hold back that juggernaut of the Industrial Revolution by crafting beautiful and functional material artifacts that may cost a bit more but a) would last longer b) look nicer and c) employ people living just down the road for a respectable wage. Here's an example [R "seaweed"] of his fussy, detailed wall-paper, fabrics, book-endcovers.  I like it; I don't think I could handle a roomful of it as wall-paper but you can order it as a 150x150mm ceramic tile that would serve nicely as a coaster. Actually, this design as many "William Morris" patterns is probably the work of John Henry Dearle a talented employee of the Morris company who started as a tea-boy and finished up as head designer and art director.  Morris  was quite shiny-eyed about design and craftmanship and persuaded a number of people to give up the day job and work with their hands.

One of these apostles was T.J Cobden-Sanderson, a friend of Morris who was also a college drop-out and not particularly successful barrister. He was convinced by Jane Burden, Morris's wife [and a person in her own right!], to give up aspiring to 'take silk' but rather take up book-binding.  TJCS founded Doves Bindery in Hammersmith, West London, named for the pub next door.  Around 1899 he went into partnership with an arty-crafty printer and photographer called Emery Walker.  Doves Press produced some iconic Arts and Crafts books including a five volume Bible, typeset in a font called Doves. Indeed all of the books produced by Doves Press used this font. I don't know what all the fuss is about: not all fonts are suitable for all purposes, but I'm sure any designer or type-setter could find a font that was good enough for any purpose without having to trick about with the details of a font like Bembo (1495), Baskerville (1757) or Bodoni (1798) and call it something different because the serifs on the descenders are now 5 degrees off horizontal. Here are a selection of letters from Jenson Venetian Roman (1470 above) and Doves (1900 below), can you tell the difference? And don't say than Jenson Roman is bigger:

TJCS and his partner Walker felt very strongly about their font which, in the spirit of who owns the ideas, both considered to be their creation. When the partnership collapsed in 1909 in a furore of recrimination and sense of betrayal, their respective lawyers allowed Doves to be used by TJ in the Press but stipulated that the font would eventually revert to whichever partner out-lived the other.  As Walker was 11 years younger, it looked like he would finish up with the prize. Doves Press struggled along for another 7 or 8 years but finally folded in 1916 when TJ was 76 years old. Rather than let his rival to have the font, he made 170 nocturnal trips to nearby Hammersmith Bridge and dumped it all, including the punches and matrices for making new type, into the River Thames.  The whole 'bequest to Father Thames' weighed more than a tonne, or more than 5kg each night.  According to his diary (!), it took him about 9 months to destroy his baby piecemeal. 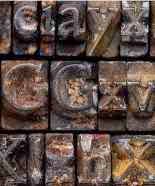 A great number of people, pre-Raphaelite groupies, Arts&Crafts buffs and the like, have claimed to be gutted about this loss to posterity but they sat there sad.  Robert Green, designer and typographer, cared enough about it to recreate a digital version of Doves - it took him 3 years.  It then nagged him that there might be a few fragments remaining on the riverbed from the great typographic holocaust of 1916-1917 . . . so he went and looked . . . and found 3 letters in a mere 20 minutes on casting about on the bank at low tide. Proof of principal established, a larger search involving scuba divers has found 170 pieces of type in pretty good condition [L from Sunday Times] after a century in the drink.

Nice piece about other (romantic) material that has been flung into the Thames.
Posted by BobTheScientist at 06:37