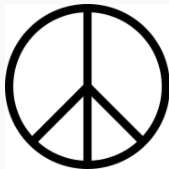 Gerald Holtom was born in 1914, so he was 3 years older than my father. In 1939, my father was already in uniform, at least partly in default of other career options for his caste when, at the age of 14,  he joined the British navy. Then again, his survivor's what-if fantasy was going to read History at university; graduating just in time to be called up; joining the army and being killed in the Western Desert. Given his AngloIrish military background [so many Captains and Colonels], Warrior Whatever had a fatal inevitability. Holtom, by contrast, refused to serve during WWII and registered as a conscientious objector.

Both my parents served in uniform in the War both saw friends in bloody bits but they didn't experience Lotto survival odds like the citizens of Leningrad, Hamburg, Dresden or Nagasaki. As the the USSR, UK and USA started to develop weapons of mass destruction in the 1950s a sense of existential dread began to cause sleepness nights for thousands across the world. In England that started to consolidate as the Campaign for Nuclear Disarmament CND which wanted to stop the development of ever more powerful and sophisticated bombs and missiles. In 1958, the Direct Action Committee Against Nuclear War (DAC) another peacenik group and CND planned a 50 mile Easter [4-8 April that year] protest march from the centre of London to the Atomic Weapons Research Establishment at Aldermaston.

Holtom turned up to a planning meeting on 21st February with the now iconic anti-war symbol shown in all its stark simplicity above left. I turned 4 that June and tbh I didn't grow up in the CND orbit. As a navy brat (my Dad [was] retired in 1967) CND was in some sense the opposition. I did think it was a rather clever design though - I thought it looked like the tail fins of a bomb as it fell away from the delivering aircraft. Wrong! 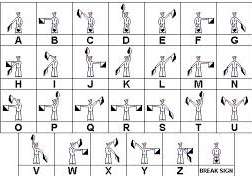 Holtom's design didn't, like Athena, spring fully armed from the head of Zeus. It started off as a cross until the bloody crusader association nixed that. His doodling hand dropped the arms of the cross  "I was in despair. Deep despair. I drew myself: the representative of an individual in despair, with hands palm outstretched outwards and downwards in the manner of Goya's peasant before the firing squad. I formalised the drawing into a line and put a circle round it". It is also, cleverly, a rebus of the letters N[uclear] and D[isarm] in semaphore [R]. Along with morse code and ship's rigging, we were also taught semaphore as kids. The best design is one so simple that a child can draw it, yet distinctively memorable and positively associated with 'the product'. Think FedEx - Ice Cream - Mastercard. But here's the thing, Holtom, the DAC and CND were mis-remembering the campesino fusilado who captures the attention in Goya's Tres de Mayo: 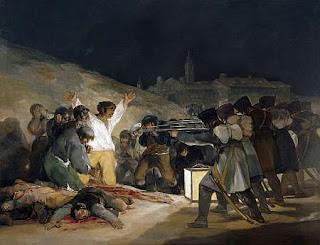 who is making a much more defiant U[p yours] than a drooping N. The logo was neatly transposed to a defiant Eiffel Tower after the November 2015 attacks in Paris. This image is deliberately off copyright, so work away on your own mods.