How to be better

You know how Youtube annoyingly provides bing-bongs for your echo chamber? Me, I want to have my horizons expanded by my media consumption; but all I get is The Usual Suspects . . . boringly similar to what I clicked last week. Meh! For the last few years, I have been youb-tuning in to a phone-in talk-show on LBC hosted by James O'Brien. It was mainly because O'Brien was anti-Brexit and Boris-skeptic and was nevertheless able to induce Brexiteers to come on his programme and have their belief system unpicked and their politics exposed as othering them furrin johnnies who want to come to Norfolk and pick asparagus for us. Poor tanned people are prepared to come to England to do cold wet dirty work that pays too little to be worth it for Brits, who in general never seemed grateful. But I never listened to 3 solid hours [10-1, M-F] of that stuff: youtube was delivering me a little 3 minute package-of-fun done up with a bow . . . leaving the rest of 15 hours that week on the cutting room floor. 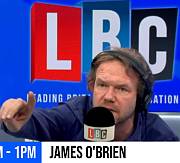 But last week I clicked on another such segment and found O'Brien hectoring and dismissive, insisting on controlling the dialogue like a barrister leading a witness down a Socratic garden path to achieve a particular outcome for the jury. Let t'bugger speak! I shouted and then clicked off to a travelogue from the Orkneys [lovely but rainy]. The next day, not quite by coincidence, I downloaded How Not to be Wrong: the Art of Changing Your Mind by James O'Brien from Borrowbox. It's annoying that this is his second confessional book, but How to be Right isn't available; so needs must when the devil drives the cart before the hearse; there's a limited inventory on Borrowbox. Mind-changing prev.

How Not to be Wrong is the result of O'Brien having an existential crisis [at home, I surmise] and agreeing to start some psychotherapy to purge his heart and head of some pretty toxic ideas, about

I've hinted above, O'Brien talks more than anybody else on his radio show and can be unwilling to actually listen to other points of view. But his changes of heart have almost all come about because of what has finally been made obvious by a caller: he talks, biblically, about the scales falling from his eyes.

That list seems a rather random set of masts for nailing your colours to. I mean, tatts!? But the continuing theme through the book is O'Brien's digging up his past [explicitly with the help of his therapist] to see why he might be so emotionally invested in the things he cares enough about to pick over with an audience of thousands. He doesn't care, so far as I know or from the evidence of this one book, about bell-ringing, the Grand Union Canal, Harriet Taylor Mill, or boxing. It's both insightful and worrying that the issues in a bloke's life stem from being frightened as a small boy by a man with tattoos; or being super self-conscious as a teenager about how he looked.

It will come as no surprise to anyone with the least bit of self-insight, that the end of his fear-and-loathing of . . whatever . . comes when he suddenly is forced to see The Other as just another person with hopes and aspirations, rent to pay and ends to meet, and the right to be different. Like the nurse who called in to defend the right of a primary school teacher to have visible tattoos. "I'm a nurse, James, I've got tatts, and a couple of neck piercings, and people call me an angel". The cognitive dissonance causes him to wincingly remember riffing on and on during his programme about fatty-fat-fats while his daughters were being cared for by a trusted childminder who was clinically obese.

He's still neutral [or he'd like to believe that] on the Trans-Wars having heard much vehemence and certainty from both sides in the argument about what makes a woman. He shares an extraordinary phone in by a father in his 70s whose well grown-up child is transitioning ♂ to ♀ and the dad uses she and he interchangeably and is clearly confused about the whole situation. But just as clearly the old chap loves and wants to support the person whom he taught to kick a football.

So hmmmm food for thought . . . for me about the State of Israel.

I'll add that this is my first audio-book which actually recognises that the medium is different from print and can be editted / presented differently. Massive fail on this for Matthew Walker's Sleep book. The print reader gets a transcript of some dialogue from an old radio programme; audi-istas get the actual recording. And the reader is . . . James O'Brien which adds a level of engagement and sincerity. Maybe all talk-show phone-in hosts should have some therapy as part of the training - it might dial down the cruelty on air.