It's been a mild Winter / Spring so far. In February it was bucketting down rain, then we had 10 days without a drop, and then we had a couple of storms - situation normal for Ireland. In early Feb I was up the hill on my own and stepped over the fence into the Sitka forest owned by Coillte. It's at least 40 year since it was planted through the steading known as Dreelan's and across the county border into Wexford. It was thinned about 15 years ago and it has been ready for clear felling for the last couple of years. It's dark in the forest and dank and mysterious and in the right season rich in fungi. When the forwarder was in there thinning, several roads where driven through the trees to access all areas. The forest floor was well torn up by the monster machines which cut the trees and extracted them in 8ft and 16ft lengths.

Wherever these tracks levelled out the ruts filled with water and there was a local flush of bright green sphagnum and other mosses. When I visited that February day, the surface of the pools was half-and-half frog-spawn and water and the eggs were piled high and deep in a vivid statement of fecund abundance. As I approached invisible frogs disappeared beneath the surface with a noticeable plop.

古池
蛙飛び込む
水の音
[Basho prev] eee but, like Basho, I do love a frog! They represent the transition our ancestors made from the sea to dry land. But like other amphibians they are compelled by evolutionary inertia and physiological imperative to return to water to spawn. It wasn't until reptiles evolved an amnion to keep the embryo artificially wet that we [reptiles, birds and mammals] finally cut loose from the sea. No more than Met Eireann, frogs cannot see the future, they can only feel the wet but they need the pond to stay wet for several weeks: three to hatch into pollywogs / tadpoles and many more until the thrashing propulsive tail is resorbed and four legs develop for earth-walking.  In Ireland there is only one species of frog Rana temporaria, so it's much easier to know what you're dealing with than, say, fungi or small brown birds. 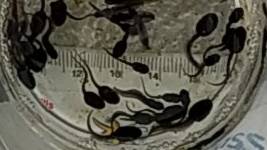 It's a sin and you shouldn't do it at home or otherwise but a tuthree days later, I returned to the forest and scooped a couple of generous handfuls of frog-spawn into a bucket and some mossy clods from the same puddle into a feed-sack and brought them down to our garden. I think these domesticated frogs have at least as good a chance of surviving under my watchful eye as they would have left to nature red in tooth and claw.  On St David's Day, the spawn had effectively disappeared and been replaced by dozens and dozens of wrigglers about 12mm long. I sent the family a really terrible photo of some of this progeny with a 30cm rule for scale. Two weeks later, just before St Patrick's Day, immersed a drinking glass in the frog crate and brought out 30 - 40 tadpoles for a more formal shot [see L]. They have definitely put on weight! At the moment they are eating mostly veg but I have promised them a delicious menu of flies, worms and molluscs for when they turn carnivorous with adulthood.
Posted by BobTheScientist at 07:33