It's the clarion of our times: black kids getting an unfair share of attention from cops. Now for not wearing cycle helmets. Bike helmets? Everyone has strong opinions on the matter, but those feelings are not always evidence-based. Nevertheless, some jurisdictions are really hot for helmets and have enacted laws to require them a) is for adult but more commonly c) is for children. And it seems that b) is for black cyclists get an unwanted solicitous interest in their own safety from the police.

That in itself is a reason for a serious rethink of Helmet Laws because it is easier to decriminalize bare-pate biking than it is to de-racialize cops. This issue was discussed with a lot of heat and some light and even some data on Metafilter. I came to the discussion late enough that people were calling each other idiots, so I was hesitant to contribute my 2c-worth of victim-blaming. I was whacked off my bike, in September 1997, by a woman looking down for her mobile phone rather than up for stationary cyclists. Werner Herzog made a film about people who'd killed others while txtn. In all the aftermath of that non-fatal road crash, I had to fill in a lot of forms and they all asked whether [__] I-the-cyclist was wearing a helmet. At the time it gave me a friss of indignation having been the innocent victim of a 1.5 tonne assault on my person causing actual bodily harm. The debate on Metafilter included "blaming the victim" in similar circumstances. It is ever thus when the balance of power is grossly asymmetrical, the powerful <cof>George Hook</cof> put their thumb on the scale by blaming the victim: "she was asking for it with that short skirt". If you cycle without a helmet, you are by definition reckless, and so the blame for the crash can slide off the car's bonnet and anoint the fallen. I am the cliché patriarch: children, grandchildren, silver hair, a farrrrm[let] of land, respeck. All that privilege! Except that one time in 1997 that I was a victim being blamed. Something that women, and POC and children experience with depressing regularity.

I also take this opportunity to boast a bit.  In 1997, cell-phones were still a minority sport; cycling is/was much less common in Ireland than, say, DK or NL; car-tonks-cyclist is comparatively infrequent. Put the numbers in a Venn diagram, and I reckon I've a good claim to be the earliest Irish example of mobile-phone related vehicular assault or at least an early foistee of victim-blaminghood in that field.

At first glance[ing blow] pretty much everyone say that wearing a bicycle helmet is A Good Thing - for kids certainly and for adults too. And on an individual basis the risk assessment says gerra hat! Because the cost is much less that harm of connecting your unprotected head with the curb or road surface. If you can afford a bike, you can afford a helmet and a bell, reflective strips, lights as well. Then again, then again, the marginal cost of a helmet may stop people who really need the exercise from getting some cardio cycling to work or the shops for a Sunday newspaper. So Helmet Laws may have net negative effect on community morbidity and mortality. The marginal cost may tip the balance. Same applies to bikeshare schemes. A poor person can ride a sharebike across town to a job interview. If they get the job, then they can buy a helmet for the commute. The poor don't have money, car-driving legislators. And, with more force, helmet laws give crook cops yet another stick to beat black people. 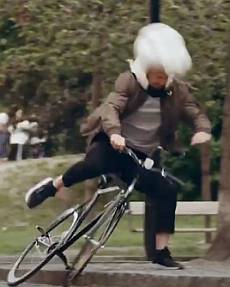 The free from helmet lobby worry about victim blaming and that bullying cyclists to wear a foam hat does little for a cyclist who encounters a car travelling at 50 or 80 km/h leaving a partly protected head barely attached to a broken body. Maybe the campaign should be on drivers and their behaviour, hmmm?. It has been argued that typical bike-helmets with their weird holes and baffles make sufficient sound that cyclists cannot hear traffic behind them and so take curb hugging evasive action. The €300 answer to that is the Hövding: an airbag for the head and neck which deploys from its collar [as R] like an airbag on impact. But that will take our POC job-seeker months to pay off.Most imaginable cases where a bike helmet comes into its calling will involve other damage: road-planing abrasions [wear gloves!], bent forks, wrenched shoulders. It's therefore expedient to take measures to avoid the incident in the first place. What worked for me during 40,000km of commuting:
See what I did there? I measured the psychological effect of intervention X on driver Y. That idea was tested [ooooo data] by a cycling psychologist from Bath, Ian Walker, in 2007. He kitted up his bike with sensors and took to the streets until he had been overtaken by more that 2,000 cars and recorded distance to curb, vehicle size and colour, time of day, bikelane? and helmet? Later he added data with him wearing a blonde [I R a wimmin] wig. The crunched data indicated that cars shaved significantly closer to helmeted cyclists [because protected?] and edged further from wiggy [because women drivers?]. In 2013, the raw data was re-analysed by Jake Olivier a road-safety expert who carries a torch for helmets. If you look at the data through Olivier's stats-lens, then there is no significant effect on driver behaviour. In 2019 Walker went at this rebuttal, fingered a bunch of statistical special pleading in Olivier's case and re-stated The Walker Effect about driver reaction to helmets. That all tells me that the effect is about as clear as whether masks work against CoVid-19. But fuzzy data won't stop folks getting vehement when they are choosing a fence-side.
Ben Goldacre & David Spiegelhalter British mavens for the public understanding of numbers wrote a nuanced BMJ editorial about helmets and law and their effects. It's too short to explore all the avenues but it emphasises that we need a more holistic view of public health interventions. Demonizing cyclists and forcing them to the road-margins of our car-obsessed lives is politically appealling because its much easier to cram a helmet on the poor bloody cyclist than it is to pay attention to the view through the windscreen.
Leigh van Valen was an eccentric but brilliant evolutionary biologist in the 1960s and 70s. He was famous form driving a VW beetle through the streets of Chicago wearing a motor-cycle crash-helmet. This being before air-bags. Seat-belt laws were only introduced in the USA in the 1980s. In-car crash-helmets was real nutty professor stuff. But what about it? If we are in whataboutery mode, what about whip-lash? That is the big driver-up of insurance premiums in Ireland and terrible to endure. Do you think that whip-lash is made worse because the torso is tethered to the seat, so all the inertial flexure is taken by the cervical vertebrae.
Q When will prophylactic orthopedic neck-braces become compulsory for car-drivers and their passengers?
A bout the same time as plane-seats are forced to face rearwards.
Posted by BobTheScientist at 07:52