Have I told you about fatbergs? I have, begodde! We were down for lunch on the Wexford Coast on Sunday and very nice it was too. It was sharp and sunny outside with the Kerragh Islands on the horizon black beyond a greeny sea. I was glad we could sit beside a roaring log-fire rather than garnering virtue [and yet more plastic buoys, rope and fish-boxes that I really have a use for] with a walk along the beach. As householders myne hoste and I were comparing notes about storm damage and house-keeping. It seems that a few months ago, their foul-water pipe backed-up from a sclerotic clot of congealed fat. They hadn't been as obsessively careful as us about washing greasy plates and pans in the kitchen sink and the residue had come back to bite them. For a variety of reasons, he elected to clear the pipe chemically rather than mechanically and dumped a load of hot sodium hydroxide / caustic soda / lye / NaOH down the kitchen sink and left the room. It was okay in this sense - that the water started to flow again. But he hasn't done a colonoscopy yet to estimate when he should buy the next packet of NaOH. Basically what's happening down there is that the Na+ and the fat are making soap which, as you know is water soluble. If you could get a really good marketing team in place, you could do this on an industrial scale with matter from fta-clogged pipes and sell the soap under a brand-name like Flush!. Well it's a better name than Enema - the soap that cleans the darkest places. 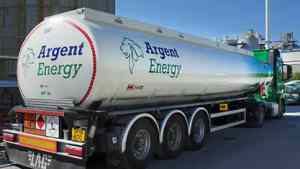 The after-lunch chat shifted slightly from cleaning out fatbergs to monetizing them - but not as soap but rather as bio-diesel. Argent Energy from the English Midlands is actively scavenging fat-bergs, and heating them in a huge vat - remember that these slug-like tangles can weigh in at 10 tonnes or more. The wet-wipes, sanitary towels, hair, dental-floss and nappies (who would throw a diaper down the t'ilet? What were they thinking?) all sink to the bottom or float to the top and the now liquid grease can be run out of a spigot at the base of the vat. Like pressing olives, you could have first run extra virgin diesel and them squeeeeze the mass until it yields the last drop of discoloured goop.  When the hot liquid cools, I'm guessing that like chicken stock, the fat floats to the top and the water-soluble proteinaceous soup sinks. I was making soupe aux choux over the weekend, for example, and the liquid cooked out from the belly of pork cooled into a rich brown gelatinous stock covered by a layer of pure pork fat.

The Argent plant in Ellesmere Port near Liverpool can recover 25%-40% by weight of oil from fatberg and has a production capacity of nearly 100,000 tonnes of the good stuff each year. Previous to their enterprise, fatbergs were a hazardous, noxious waste product that was burned or land-filled. Now it's getting a second lease of life in a repurposed form before it goes up to make carbon footprint in the sky.  Argent has a regular order of 30 tonnes a week from one [large] sewage treatment plant in Birmingham. There are 9,000 such places in Britain.  I hope it works out for all parties.